Beautiful options of arbors for grapes 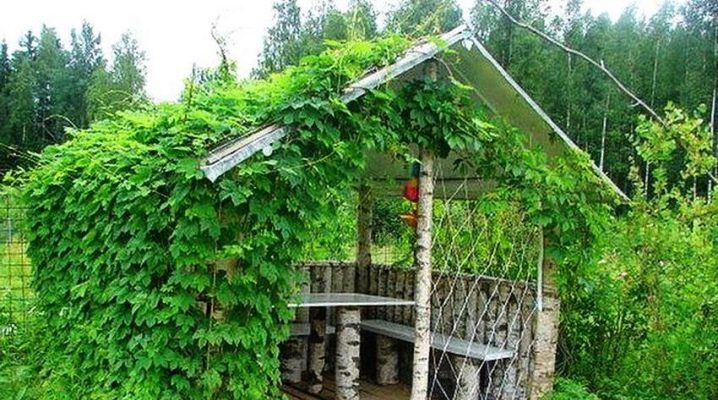 The grape arbor on the site is an amazingly beautiful structure. The frame for it is built easily, is inexpensive, the result is visible in the first season. You can assemble a light and simple canopy at the entrance to the house. But real aesthetes create grape arches, galleries, green rooms, fabulous houses or entire labyrinths on their site. If the buildings are decorated with the upper green cover, they play the role of beautiful shady arbors. 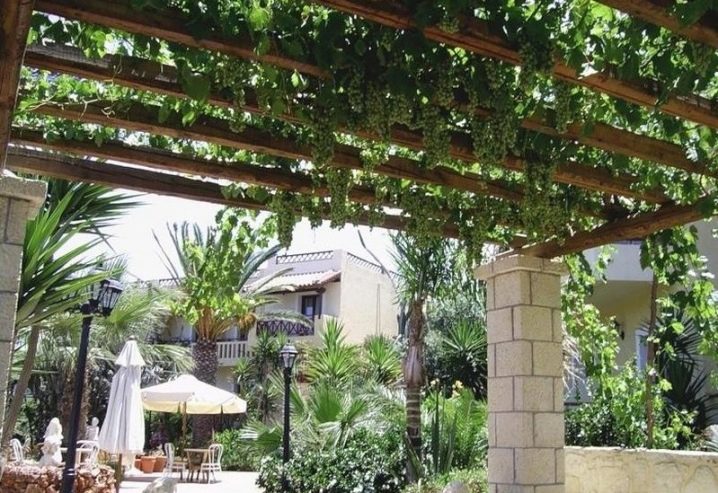 Pergolas are divided into seasonal, which are collected in the warm season and hidden in the winter, and stationary, built thoroughly for any season. The first plants are planted in pots and flowerpots, the second is planted with perennial grapes and other species of climbers. Stationary buildings are beautiful and diverse. Their frames have different textures.They can be from metal, stone, brick or wood, may contain combined building materials.

You should know that wood is not very suitable for creating arbors from grapes. Some species of this plant live up to 200 years. The tree, being exposed to moisture from watering, will rot much earlier. But the beauty and ecological purity of this material attracts many who prefer it.

Starting the construction of arbors, you need to know for what purpose it will serve, what functions to perform.

Arbor for rest can be tent, dome-shaped. If the rest is planned with a barbecue and friends, the size of the building are assumed to be voluminous and capital. According to fire safety standards, such an arbor should be at a distance of six meters from any buildings. It may be square, rectangular, multifaceted or indefinite. Arbor, predlagayuschaya to the building, usually serves as a shady shelter at the entrance to the house. It is quite budget, as it requires the construction of only one wall and the top cover.

Miniature gazebos are installed in gardens to decorate the landscape as an addition to decorative streams and fountains. Arbor for a cozy holiday arrange in a shady corner of the garden. On the hill is usually used air design, resembling a viewing platform. The variety of species is in the geometry of the structure.

They can be round, dome-shaped, many-sided, arched, square, irregular shape, predlazhayuschiesya to the building, pergolas, trellis under a canopy.

The arc-shaped forms of the arched structure, if they are mounted correctly, without distortions and deformation, look very attractive.

To create the arch you will need to perform the following steps:

This type of gazebo is made from reinforcement, pipes or wood.

The following algorithm should be followed:

Such a structure will decorate even a small courtyard.

To create such a structure, you should perform the following actions:

Building attached to the house

This is the most popular type of green construction, which is often set from the gate to the porch of the house.

Arbor, attached to the house, has the following features:

Beautiful designs of irregular shape, created by the designer, fascinate with an extraordinary look.Constructions of irregular shape well fill fragmented, unsuitable for use space on the site. But they can be built on a flat, sunny surface on any scale, guided by non-standard solutions of the designer. The multi-faceted structure of the power to collect their own hands, you only need to "be friends" with a plumb and level. With these tools, the edges are balanced and measured.

In the construction of such structures, it is necessary to consider the following nuances: 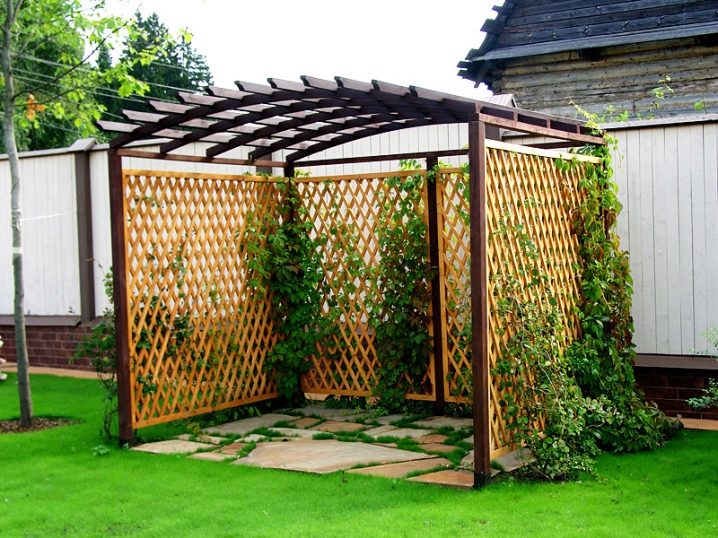 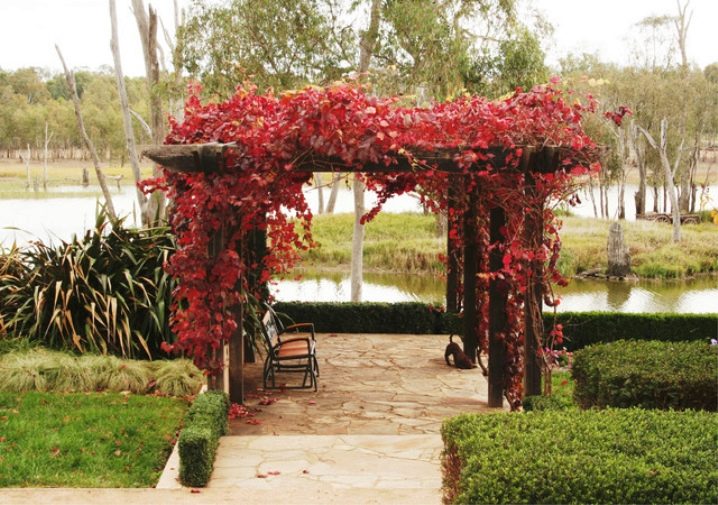 Grapes are a beautiful and useful perennial plant that can even turn into a fairy-tale lodge with an obscene arbor. He will not only create a thick shadow for 1–2 seasons, but also will delight with a juicy tasty berry. Arbor is formed in the first year after planting seedlings. In the second year, the first fruiting is expected. Adults can be considered 4-5-year-old plants.

How to plant a vine?

The number of seedlings around the gazebo will depend on the grape variety and the size of the structure. Sometimes two bushes are missing at the entrance of a round building. If the arbor is square-shaped, one plant is planted at each of the four pillars. Along the perimeter of a large arbor, cuttings are planted every two meters.

One of the ways to form a gazebo is called a fan cordon, when the plant is directed not upwards, but into the girth of the building. From the woody bundle, the fruit vines diverge in different directions, forming the so-called fan. Created large sleeves, a length of one and a half meters. The fan method can be bezshtambov or with the release of a trunk. Pergolas have more than four branches, on which fruit links are formed every half meter. Trimming young shoots, the sleeves remain unchanged, they are updated only in the case of winter damage.

The high-stem vertical cordon is one of the most popular forms of the formation of a grape arbor. Grapes, processed in this way, is developing rapidly and gives a rich harvest. The disadvantage of the method can be considered the lack of vegetation in the lower part of the arbor. Correct the situation planted bushes around the building. But it is possible to form a high arbor in a complex way: with a vertical and fan cordon at the same time.

It is worth considering in more detail how to form an arbor with a vertical cordon.

The final stage of gardening gazebos will depend on the goals. If the climate of the region allows not to cover the bushes of grapes, you can choose a vertical cordon. In this case, suitable and high shtambu with magnificently hanging shoots. In cold regions, where it is necessary to shelter the plants, you can use the bezshtambovy option or the stamba fan cordon. For the table mode, a low stem with a vine is formed, which is easy to prepare for winter shelter. 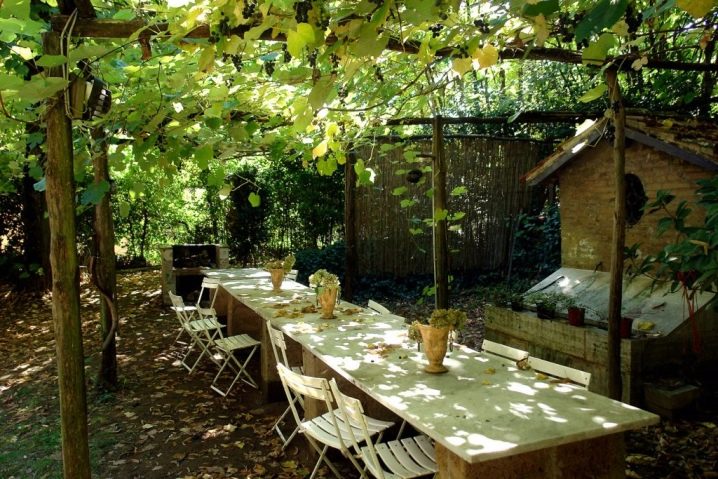 We select the right varieties

Not every type of grape is suitable for creating a beautiful, well-formed pergola. Looking for frost-resistant, fast-growing, bulk varieties. Grapes "Wild Maiden" - is a favorite decorative variety among many summer residents. This is a great solution if there is no need for berries. He is unpretentious, easy to clean and very beautiful. One plant can take up to 20 square meters. It easily climbs without a trellis on brick and masonry to a height of 15 meters. Oblong carved green leaves in the fall light up the scarlet, purple, purple.

From fruit-bearing gazebo species, frost-resistant species include actively growing Amur varieties (they withstand temperatures down to -30 degrees). Fruits with a pronounced taste.Unpretentious in the care, with a strong development and pleasant taste qualities of the variety - this is "Lydia", "Valiant" (Valiant), "Alpha", "Concord", "Isabella". Shrubs undemanding to the abundance of the sun, well tolerated shade. The versatile table varieties giving a bountiful harvest proved to be excellent: they are Prairie Star, Victoria, St. Croix, Timur. They are resistant to frost, but in some regions need shelter.

How to choose and fix the grapes for the gazebo, you will learn in the next video.

Furniture for gazebos: ideas of manufacturing and design

How to build a closed gazebo for the garden of timber and other materials?

What are the advantages of soft windows for gazebos?

Wooden lattices for an arbor: how to make your own hands?
Information provided for reference purposes. For construction issues, always consult a specialist.