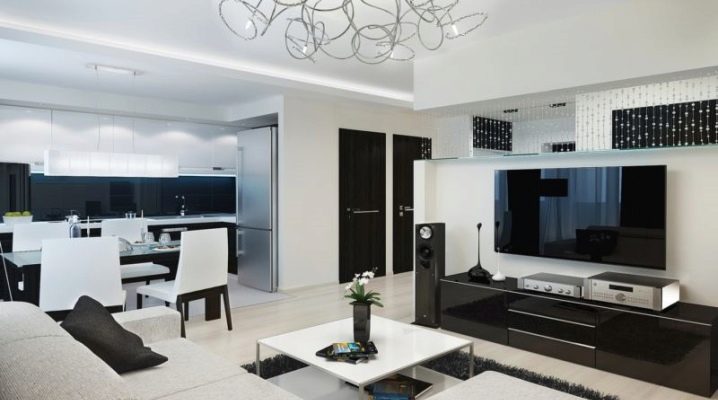 Three-room apartments are for the most part quite spacious, but this does not mean that the original layout of them cannot be improved. You only need to know at least the minimum subtlety of design and design approaches to prevent gross errors. In each case, an individual solution is required.

The panel houses of the early series (“Khrushchev”) were distinguished by the inconvenient arrangement of small rooms, thin walls, a very low ceiling, and a combined bathroom. 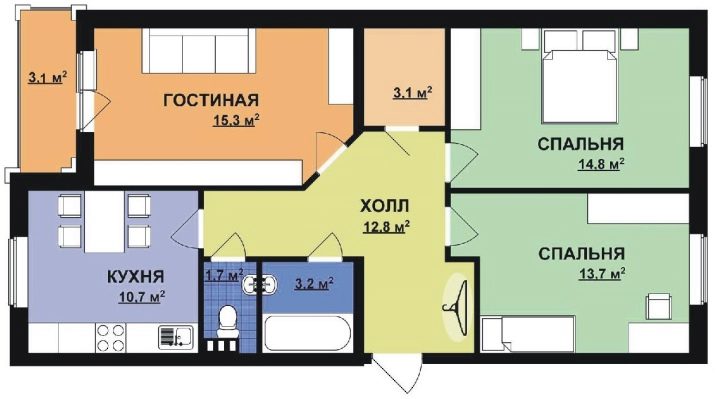 Housing of the improved planning was recently considered everything that is more comfortable than the “Khrushchev” series. The presence of a loggia and the exclusion of passage rooms is no longer enough Improved is considered only such an apartment, the parameters of which are better than those specified in the SNiP. This is necessarily a spacious room, and made with the correct proportions. Not uncommon - living rooms in 20 and 30 square meters. m, the area of ​​the bedrooms is 12-15 square meters. m

In addition to size, great attention is paid to lighting - the balcony is made according to the French type.

Three-room apartment with improved planning can not have a kitchen of less than 15 m2, additional sanitary facilities are necessarily organized. They are most remote from the kitchen and dining areas. Bathrooms in the new building can be both combined and divided, this will not affect the classification of real estate. Bathrooms are made roomy enough so that you can even put a miniature sauna. Be sure to present a terrace, loggia or balcony with a minimum width of 120 cm.

Speaking about the planning of apartments, you need to mention the difference in houses with five and nine floors. Nine-storey buildings are attractive for those who want to stay higher and have a good view from the window.

But the peculiarity is not only in this - such buildings are mostly more comfortable than five-story buildings. Initially, higher houses were equipped with elevators and garbage chutes.

Brick buildings could be completed in different ways, depending on the time of construction and on the project.

In addition to the type of building you need to take into account the project for which it was carried out. In Khrushchev's apartments, standard rooms were walk-throughs, the largest of them was located next to the storeroom, from which, in turn, could only go into the bedroom. Series 1-335, as well as K-7, are notable for their small kitchen space, miniature hallways. The height of the ceilings in the houses of the 335th group is 255 cm.

In K-7, it can reach 259 cm, balconies are not provided. In the series 1-447, the plan does not foresee balconies, often without corner apartments. The main construction material is brick.

In the 3-room apartments of modern houses, in contrast to the old five-story, sanitary facilities are separate. Living rooms, kitchens and bathrooms have become more.It is rare to find a three-room apartment, where there would be no balcony or loggia. There are a variety of sizes - 70-76, and 80-100 square meters. m and even more.

Apartments in nine-storey buildings of the 80th series, built since the mid-1970s, implied the presence of kitchens from 7.5 sq. M. m, with only one room is separated, the other two - walk-through. Since the late 1980s, the kitchen area has reached 9 square meters. m, all rooms become autonomous from each other. The difference between the 83rd and 90th series lies solely in the configuration of the balcony - triangular in the first case, straight or slightly sloping in the second.

The 90A series, which appeared already in the 2000s, is notable for its 14 square meters kitchens. m, plus equipment immediately two balconies.

In the old housing stock, the Czech layout of a 3-room apartment is quite common. It is characteristic of housing located in houses from 9 to 12 floors high, built no earlier than 1970 and no later than 1990. The ceilings are low, do not reach 250 cm, two balconies - straight and oblique. Such buildings were built of brick, and of reinforced concrete, and of expanded clay. The area of ​​the apartment is usually 60-64 square meters. m 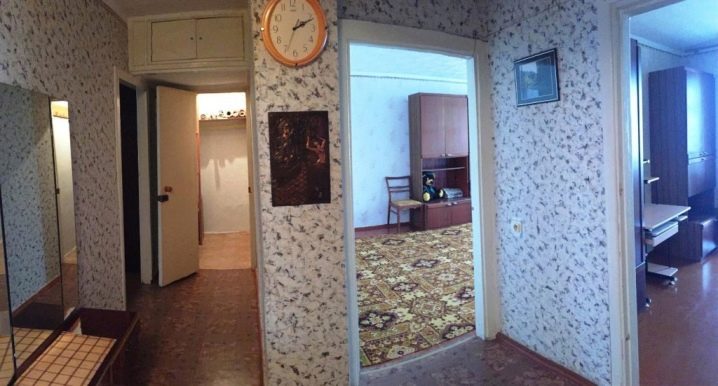 The vest, or the scheme with the organization of windows on both sides of the house, much more interesting than the classic version, in which light penetrates only from one or two points. To enhance the practicality of such a home, you need not only to install modern glass packs, but also to transform the window sill into a miniature built-in table.

It would not want to make originality and fresh mood, it makes sense to always think about choosing a classic style. It is economical and relatively neutral, rarely requires the use of unique materials and custom-made structures.

But at the same time and in the classic design you can find interesting moves. So, massive ceiling eaves and decorative beams, columns will look not bad. In the "vest" can look very attractive combination of loft and Scandinavian style. 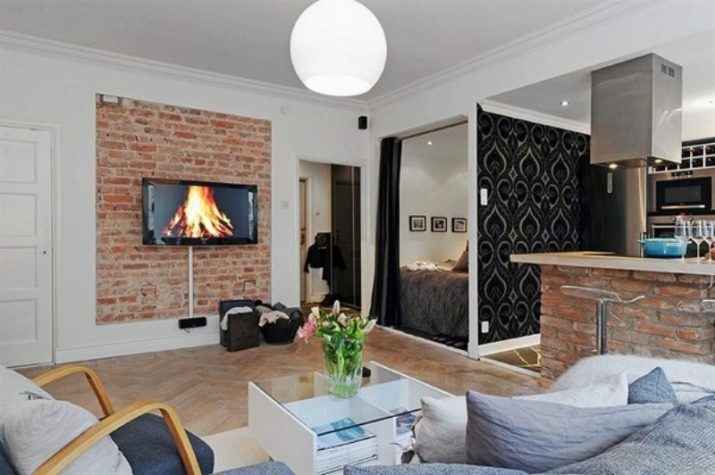 Design techniques help relatively easily eliminate the visual shortcomings of the planning of a three-room apartment. To correct the problem of insufficient space in small rooms is capable of a stylistic solution in light shades.

The most advantageous positions among them are:

To further emphasize the subtle view of such a design, single bright blotches are attached to it; It is very good to use a decor with flower and vegetable plots. In addition to wall panels, they can be introduced into furniture or even decorate sources of light. On the long wall of the hallway will look great family photos. The final result - the room is well saturated with light and does not look boring at all.

It makes sense to decorate the living room with a uniform light background., then it will turn out to combine in the rest of it the tones that are usually considered incompatible. A good idea is to combine the kitchen and the living room in color (the colors of the lower kitchen fronts, walls of the guest room and book shelves may coincide).

Part of the designers deliberately makes the grout between the tiles on the aprons and the upholstery of the poufs, where the guests will sit, indistinguishable by color. The common white color due to the soft green shades mixed with it improves mood and helps to emotionally relax. Among other combinations it is useful to use matching patterns on the curtains in different rooms, while the curtains themselves may have a different color and even be made of dissimilar materials.

It is advised to paint the kitchen with light paint or to cover it with not too dark finishing panels. Bathrooms in classic and modern apartments are practically not decorated, this allows you to hint at the strictly utilitarian task of such rooms.

The selection of interior items is also important, since they can mask many of the shortcomings of the room layout.

Particular attention should be paid to the decorative side of the nursery and its layout: consider how you can put all the required furniture and not clutter up the area.

Do not try to put a maximum of furniture in the bedroom, let it be lighter and lighter, you can even emphasize the walls next to the beds with light tones wallpaper. Built-in wardrobes are optimal for the hallway, because they allow you to hide unnecessary objects from prying eyes, to free up space.

Modern three-room apartments can be combined with the most daring accessories, breaking the usual patterns in a radical way.The mirror, as if assembled from squares, forms the illusion of a door that leaves no one knows where; the living room ceiling can be not only raised, but also partially lowered, in order to install hidden lighting devices and mask the curtain rods on which the curtains are hung. The original idea is a fundamental rejection of the main lamp, a preference for hidden lighting devices in any part of the room. If you want to emphasize your commitment to the exotic Japanese style, just put bamboo sticks behind a low sofa. And these are just a few examples of how to create original designs in the simplest ways.

Fixing mirrors above the dressing tables helps to add to the situation in typical rooms of visual integrity. Directly opposite you can put the TV and the workspace, which are visually connected by wall shelves. But space can be both combined and divided. In the corner three-room apartments for this purpose may be useful partitions, placed in between the window openings. That will be released instead of the usual three four rooms with minimal effort. To register such a change is also easy.

When there is not enough space, it is worth expanding the door openings and putting in them roller skating structures. This technique, which is important, will enhance the ventilation of remote rooms. 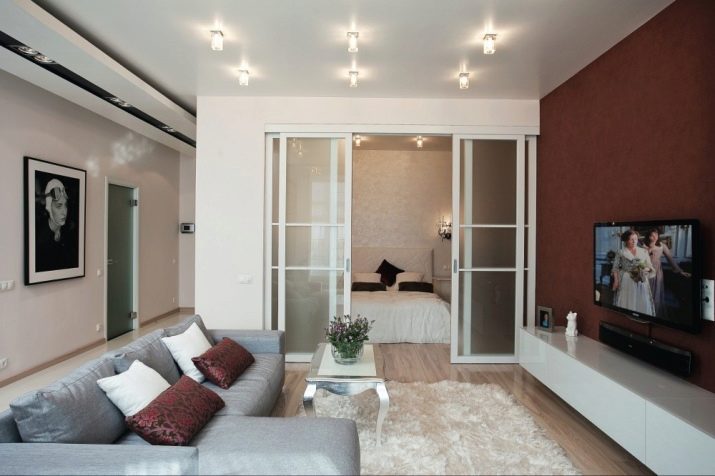 In the variant with the organization of a bedroom, a living room and a nursery, it is advisable to merge the kitchen and the dining room into one object, and keep the overall style in a beige color. When the kitchen and guest space are not large enough, it is better to erase the boundaries between them already, at the same time expanding the personal space. The other two rooms should be turned into an office and a nursery.

Often in three-room apartments, partitions that separate the living rooms and corridors are removed. Combining the bathroom and toilet with the mashing of one door will help to increase the area of ​​the room.

Being engaged in re-planning or repair of a three-room apartment do not forget that it should be primarily functional.

Ideas for planning a 3-room apartment - the next video.

The subtleties of redevelopment "Khrushchev"

Features of the planning of apartments of various sizes
Information provided for reference purposes. For construction issues, always consult a specialist.