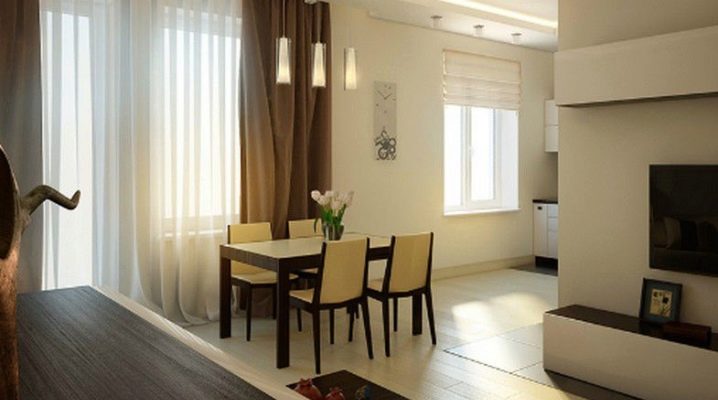 Apartments of Stalin's times occupy a niche in the real estate market and are still in demand due to their numerous advantages. The housing stock of the period of 1930-1950, which is popularly called simply “Stalinka”, has its own characteristics and traits. It is a whole layer of the era in the construction and planning of apartment buildings.

According to the chronology of construction, Stalinist houses can be divided into two types: pre-war and post-war. This gradation is important when choosing an apartment, since the time of construction significantly affected the layout and dimensions of the apartments.

Starting in the mid-30s and continuing until the war, construction was not limited in resources and time, and therefore residential buildings were built with special care, maximum attention to detail and care about decor.The buildings are distinguished by graceful facades, architectural delights, scope and ease of planning. They were built not only as comfortable housing, but also as an external decoration of cities. In the construction most often used red brick.

As a result of the war and the total destruction of cities, it was already too long to think about the intricacies of architecture. Thousands of people were left homeless, the task was to simplify the construction of buildings and in the shortest possible time to provide the population with living space. The construction of houses was done from a cheaper white brick, less attention was paid to the appearance of the buildings, and the layout of the apartments changed significantly in a rational direction. Began to appear apartments corridor type - communal and dormitories.

Despite all the troubles of the time, Stalin's houses had their characteristic features both before and after the war and were divided into “nomenklatura” and ordinary houses.

Nomenclature houses or skyscrapers for senior managers of the Soviet elite, built according to individual projects, became an adornment of the central streets of cities and were the embodiment of the dream of comfortable housing.Classical architectural forms of tall buildings with a mezzanine became a characteristic feature of nomenclature houses. Elevators, reinforced concrete floors, high (over 3 m) ceilings, stucco decoration, spacious rooms are the main features of the nomenclature "Stalinok". Planning, as a rule, assumed 3-and 4-room apartments.

Typical "Stalin" even before the war, differed simple execution, more modest layout, lack of decoration on the facade of buildings. Apartment areas have significantly decreased. In typical buildings often one-room and two-room apartments, as well as buildings of the corridor type. The architecture is simple and uncomplicated: decorations made from stucco molding are either standard, or absent altogether, the front brick is not plastered. The buildings do not have a lift, and often a bathroom. In the "corridor" type of buildings the bathroom can be one for several apartments. 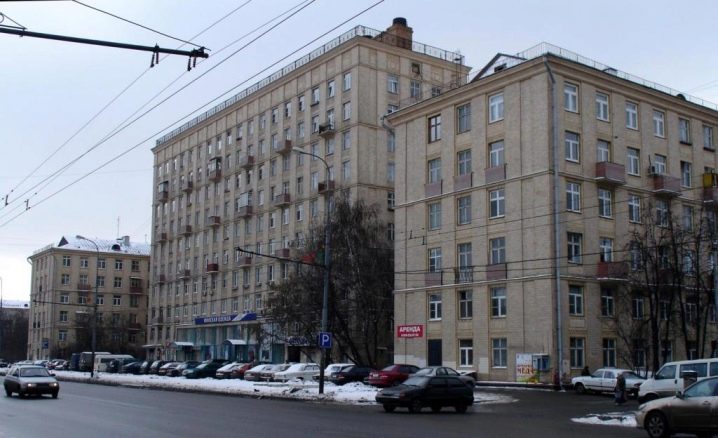 Stalin houses are still very popular in the real estate market. This is due to the increased reliability of the buildings, high sound and heat insulation of the walls, wide spacious apartments, high ceilings, which often exceed 3 m.

In terms of thermal insulation, houses of that time significantly exceed all subsequent constructions of the Soviet and post-Soviet period. The thickness of the walls in many houses reaches a meter, which ensures reliable heat preservation and protects the apartment from the noise of the street.

Another advantageous feature of the “Stalinok” was the use of internal columns and girders (reinforced concrete floors). Thanks to these structures, most walls are not bearing, which makes it possible to virtually any redevelopment indoors. 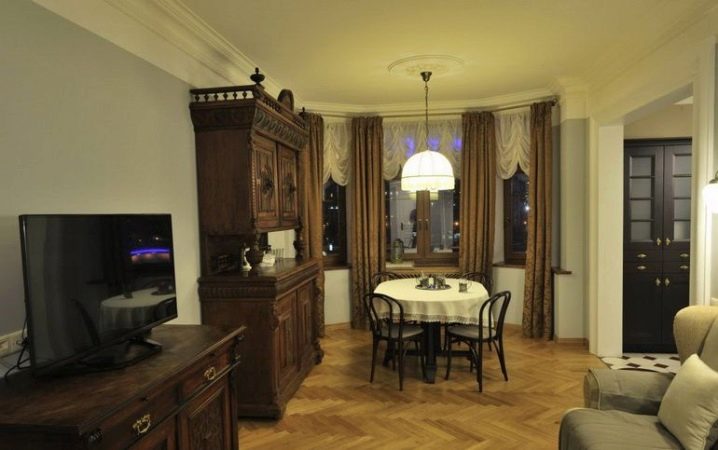 Stalin’s apartments belong to elite housing, first of all, thanks to spacious rooms and high ceilings, wide corridors, spacious kitchen areas and large storage rooms. For Stalin's houses are characterized by high entrances, and the number of apartments on the staircase, as a rule, two or three.

The construction of houses of this type was carried out with strict observance of construction technology, which is why they have been preserved in excellent condition until the present time.

The disadvantages of the “Stalinok” certainly include the fact that it is necessary to change outdated engineering communications over time.Since the construction, the water supply and wiring systems have turned out to be pretty worn out. Water supply in the “Stalinist” is often made from the bottom up to the entrance, so often the residents of the upper floors of the house suffer from inadequate water pressure.

Old-style wiring does not withstand high voltage from the abundance of modern electrical appliances. And this problem is not always solved by replacing the system inside a single apartment. 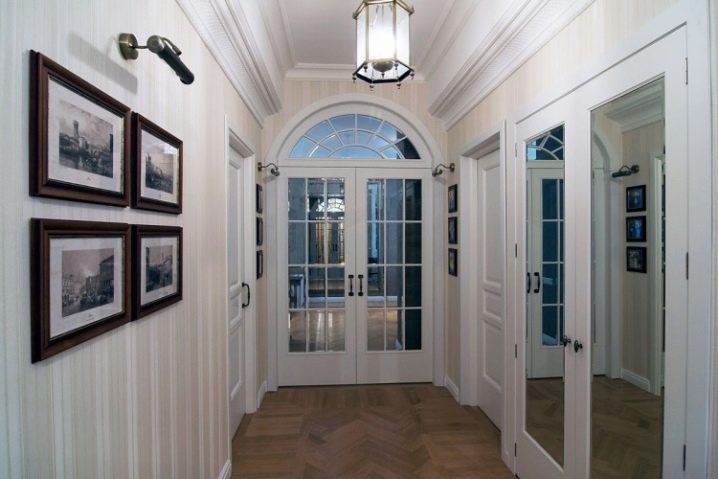 As mentioned earlier, Stalinist houses have ample opportunities for redevelopment due to the minimum number of main walls and floors. The function of supporting structures is performed by reinforced concrete beams - girders, which look under the ceiling is not very aesthetically pleasing, but are quite amenable to decoration. 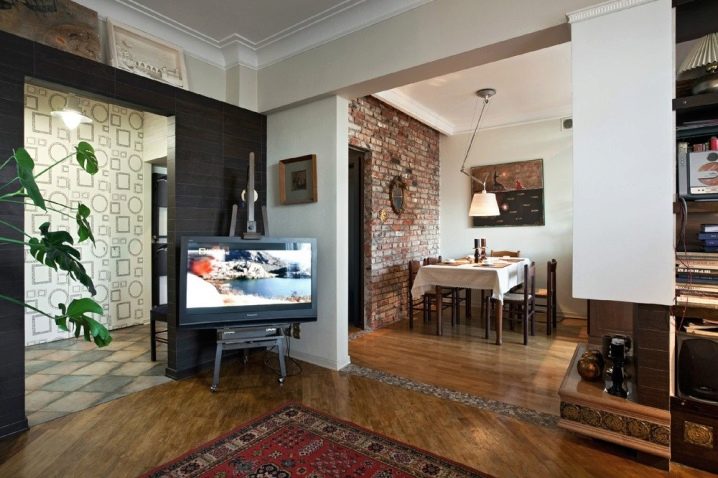 Despite the fact that the size of the rooms in the "Stalin" significantly exceeds in square meters the same housing in other types of houses, the residents set themselves the goal to improve the living space. 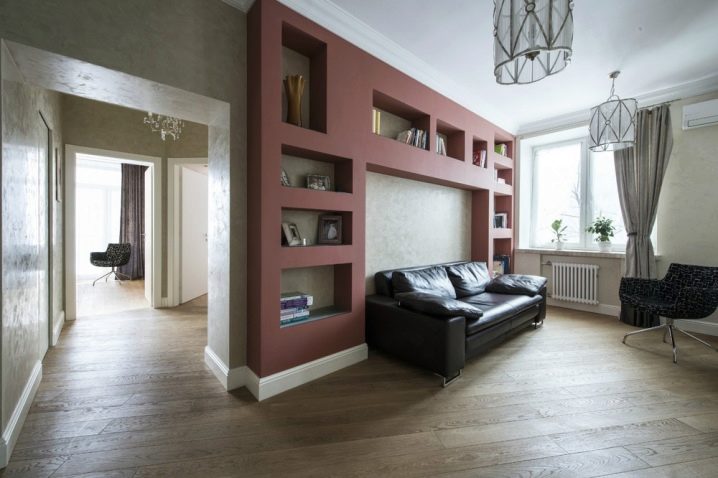 Most often, long corridors are subjected to redevelopment, the space of which can be used for another purpose.For example, to further increase the area of ​​one of the rooms and change the elongated shape of the hallway.

It should be said that visually change the shape of the corridor is quite possible without redevelopment. Having picked up the correct lighting, suitable color scale and materials, it is possible as a result to receive magnificent gallery of design work. Paintings on the walls, works of art on narrow illuminated pedestals or consoles, ceiling decoration, mirrors - all this can turn the space into an independent stylish room.

The task of redevelopment of rooms can be solved in different ways, depending on the appropriateness of the goals. The most common option is to combine the two rooms into one.

Another popular option for spacious “stalinki” halls is to divide the living room into two zones, one of which can serve as a children's room. Three-room apartment will be an excellent studio space for receptions and work, if the two rooms are combined into one, and the third left as a bedroom.

The problem of shortage of square meters is sometimes solved in an unusual way - the construction of the mezzanine.The mezzanine is a built-up floor ceiling in the main room. Thus, in a spacious hall, one half can be divided into two parts at a ratio of 1 meter above and 2 meters below. On the “second” floor there is a comfortable sleeping place, and under it - a study. This is an excellent opportunity to save the required square meters. In addition, such redevelopment does not require the approval of the relevant authorities, since no structural features of the building are not violated.

Despite the fact that the kitchens in the "Stalin" in size more than in other types of houses, squaring the usable space will never be superfluous. That is why the option of combining a living room and a kitchen is so popular. 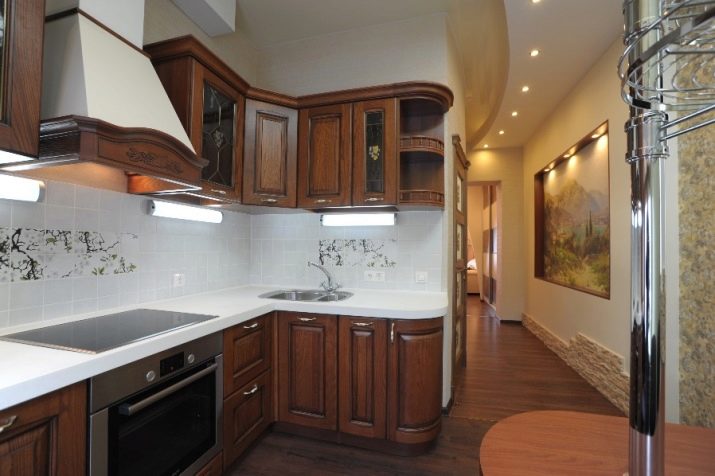 This method is also resorted to when the wall between the kitchen and the living room interferes with quick access from one room to another. The wall can be demolished completely or partially, forming a multifunctional studio. In the case of partial demolition of the wall, a wide passage is made in the form of an arch, which visually separates the zones of space.

Large space for fantasy provides room for the bathroom.As a rule, in the houses of Stalinist construction there is a separate bathroom, which is not always convenient and aesthetic. By connecting two rooms into one, a rather spacious bathroom is formed, which, if desired, and designer fantasies can be made two-level. In this case, at different levels will be located bath, jacuzzi, shower.

The height of the ceilings in the "Stalin" allows you to easily install multi-level modern structures and provides great opportunities for the installation of lighting fixtures.

Reinforced concrete beams (crossbar), which is considered one of the minuses of this type of houses, can be easily beaten in one of the ceiling levels.

The thickness of the walls of houses built by Stalin is not only excellent thermal insulation, but also wide, deep window sills. They have enough space for arranging a miniature winter garden or installing a soft place with pillows for reading books.

A wide window sill can also be a continuation of the workplace, if you install a desk near the window. The same option is ideal for a folding desktop, the tabletop of which retracts to the wall under the window, and work accessories can remain on the windowsill.

Stalinist-style houses have a gable roof, which allows owners of the upper floors to arrange a spacious attic. Of course, this can cause a number of difficulties, but a full-fledged room under the roof will never be superfluous.

In the design of the two-story “Stalinok” there is no basement, therefore the residents of the first floor often set up a mini-cellar under the floor of the apartment, where they could store products and preparations. However, this is also a disadvantage of such buildings - in order to get to the communications in case of an accident, plumbing services have to disturb the residents of the first floor and open the floors.

When planning a major overhaul, you should consider the high cost and volume of future work.

In addition to the usual repair costs, the following can be included:

Despite all the difficulties of repair, Stalin-type houses remain one of the most elite types of housing. Some people associate this with the monumentality of the building, with the Soviet quality, which no new building can match. Others are impressed by the infrastructure around Stalinist houses and architectural solutions. “Stalinki”, as a rule, are located on central streets within walking distance from stops, and at the same time they are equipped with spacious courtyards with good landscaping.

For information on how to reschedule the "stalk", see the following video.

The subtleties of planning a 2-room "Khrushchev"

Ideas and options for redevelopment apartments