Wireless video door on the door: features and specifications 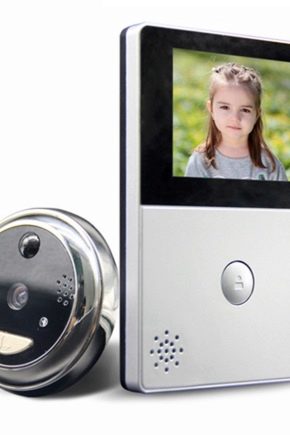 In today's world, people are increasingly using measures of increased security, since technical progress allows us to acquire a variety of products for self-defense and home protection. The wireless door peephole has recently appeared on the security devices market, but has already gained deserved popularity.

It was with his participation that it became possible to improve the security of his home.

The wireless door peephole is good in that it is easy to use and has an affordable price. Thanks to these qualities, people more and more often acquire this particular device.

It is a combination of two parts: in one of them there is a video camera with a microphone with a built-in radio module, and in the other - a video screen with permanent memory. Externally, the device looks like a completely ordinary eye, as it has the same size and shape. It is sold complete with special mounts that are designed to fix the device in place of the door peephole.

It is because of its design features that a hidden camcorder is almost impossible to notice.

It can function both from the mains and from the battery, however most of the devices come in a set with a DC adapter.

The miniature camera does not interfere with the full-fledged video shooting and recording of sound in high quality. As a rule, the size of the video being shot is 640 * 480 pixels. The resolution of the video allows you to quite clearly see the face of the visitor who is near the door.

Door eyes with video are made in two forms.

Both types have their pros and cons.

For example, an overview device can have built-in memory, or it can be equipped with a special module that accepts various memory cards. Most models are capable of not only videotaping, but also photographing what is happening behind the entrance door.

The wireless video peephole almost always comes in a set with a built-in battery, so it absolutely does not need to be connected to the power grid. Modern models are produced in a portable configuration, which includes a radio module that allows you to conduct video surveillance remotely.

This property greatly simplifies the lives of many people, especially with physical health problems.

Pros and cons of survey devices

Installing a wireless video peephole in the apartment is necessary for additional security.

This device has a number of advantages that prevail over other surveillance systems.

A huge number of positive qualities of viewing devices did not exclude the appearance of some flaws in them.

GSM-module is necessary in order to be able to obtain recorded information on any device connected to the Internet. This allows you to observe what is happening near the front door, even being far from home.

Videos and photos can be saved to further study them in more detail.

Choosing a survey device for private video surveillance, it is necessary to determine its functionality.

For example, an infrared motion sensor is an absolutely meaningless function in the entrance with automatic lighting. When choosing, it is necessary to measure the size of the door peephole in order to purchase the device with exactly the same parameters, otherwise there will be difficulties during installation.

You also need to consider the viewing angle. Often it makes no sense to acquire a camera with a large radius of action, usually enough to rotate 90 degrees.If owners want to be able to communicate with guests online, then it is worth buying a device with support for Wi-Fi.

A useful feature is the motion sensor, with which you can learn about the visit of visitors even before they ring the bell.

Purchase of a device for private use should be adapted to the average requirements. Professional video cameras have a number of enhanced features that are not understandable to the average user, and they cost many times more than their simplified counterparts.

Do not forget to carefully study the performance and reviews of real buyers before buying a wireless video peephole. Remember that the lower the price, the worse the device.

When deciding on the purchase of a wireless video eye, you need to familiarize yourself with the most popular models in order to identify their disadvantages and advantages.

A color camera and a touchscreen display make it much easier to observe, especially since all data can be saved to the memory card that comes with it.

An overview of one of these devices, you can see in the video below.

How to expand the doorway?

The doors of the company "Empire": characteristics and features

How to make the door to the bath with your own hands?

Glass doors for the veranda: the pros and cons

What is the king's door?