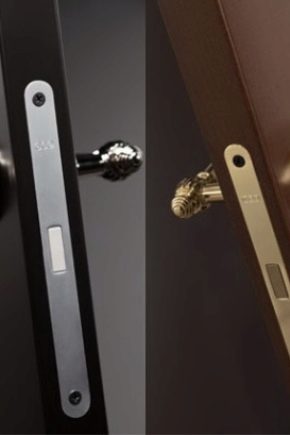 One important requirement is placed on the interior doors - they must close tightly, otherwise it will be very difficult to achieve coziness and comfort in the house. In this case, the choice of door handles and locks sometimes takes much more time than the purchase of the door leaf. That is why many consumers increasingly prefer magnetic latches that combine uninterrupted operation and durability.

The device magnetic latch only at first glance it seems difficult and highly technical. In fact, it differs in a rather simple structure, due to which it became possible to achieve a long service life.

The door handles use a fixing method, well known to all furniture manufacturers. The basis is the impact of two strong magnets: the first is located inside the handle in the form of a special bolt mounted in the slots of the box, and the second is placed in the loot.

Everyone knows from school that two magnets, located at a short distance from each other, will begin to mutually attract each other, this is exactly what happens when the door is closed. As soon as both the magnets are at the minimum available distance, the magnet that is located in the box immediately begins to attract the bolt.

It is noteworthy that it is not possible to open the door using the push-pull method - first you need to unlock the mechanism, to do this, turn the door handle, which will delay the bolt, thereby contributing to the release of the magnets.

As soon as the sash is at a distance, the magnets no longer act on each other. The crossbar in this position does not slide out of the lock case, because it is firmly fixed from the inside. By the way, individual latches have very small dimensions, therefore, in terms of their dimensions, they are quite comparable with ordinary ball valves. 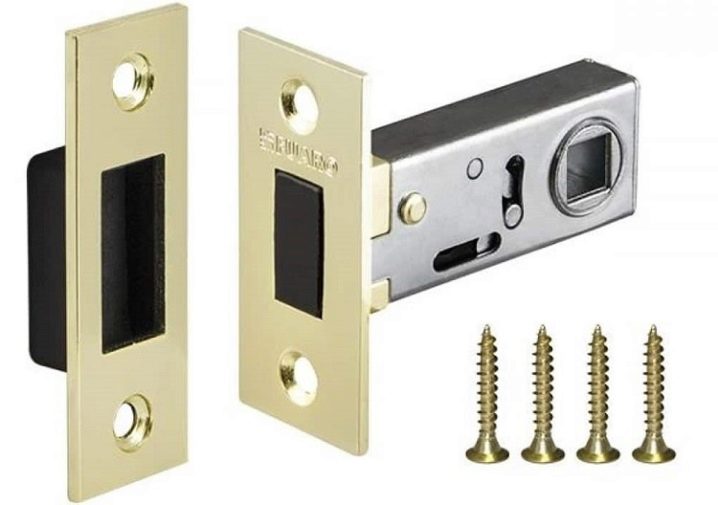 A simple latch in the form and principle of operation is similar to that used in furniture production. A magnet is attached to the door, and a second magnet or some metal element is fixed to the door frame. However, they are not located at the end, but directly in the door plane. The part where the lock is located should be cut into the butt of the door - this requires basic installation skills. This option of latches is most popular among consumers.

The handle with a lock is similar to a simple mechanism for the principle of its work, but it has an additional element that locks the handle in the closed state. This completely eliminates the possibility of unauthorized entry into the room. This option is most often used in hotels or large office premises; here the latch is activated by a special card that needs to be brought to the reader.

In general, there are quite a few options for pens, inside of which there is a magnetic lock. They can be made of metal, glass and even wood, so you can choose the mechanism that will most closely match the overall design concept of the room. The essence of the mechanism does not depend on its design, but you need to pay attention to the shape and size - the handle lines must correspond to the technical capabilities of the door leaf. There are other reasons for the classification of magnetic type latches.

So, by type of device are:

According to the installation, the shutter can be:

It should be noted that the installation of magnetic latches has many advantages in comparison with the installation of traditional mechanical locks. The main plus is safety for the child. It is well known that standard handles in a traditional lock often protrude at the end of the door leaf and are often located at the level of a child’s head. If the baby stumbles, it can hit and get hurt. When a magnetic mechanism is installed on the door, the probability of injury sharply decreases, as the bolt in the device is constantly inside.

Magnetic latches have a fairly clear and simple installation principle.they have minimal wear and therefore can be used for a long period of time. This is another advantage over mechanical valves, in which parts constantly rub against each other and wear out over time.

Magnetic latch operation is stable. The mechanism of the magnetic shutter works smoothly even when the door is sinking, which is completely excluded when using mechanics - in this case, the tongue simply stops falling into the counter plate.

Mechanical locks are distinguished by the fact that when entering a room, the tongue starts to click quite loudly, so it is not possible to enter the room quietly. This brings discomfort, if there are sleeping people in the room - the sound can wake them up. With magnetic closures this does not happen, they work very quietly. Among the shortcomings, the high cost of magnetic latches can be noted, however, experts predict that with an increase in sales volumes, prices will begin to decline.

When choosing a magnetic latch, preference should be given to models based on the work of ferrite magnets. They retain their performance properties for many decades, which can not be said about the mechanical elements that sit down a few months after use. Keep in mind, despite the fact that the basic interaction of internal elements is due to magnets, the design still retains mechanical components that need replacing over time. When installing this feature should be taken into account - try to install the latch in such a way as to provide free access to internal parts.

Of course, when installing the latch should not use adhesives, which can be removed only with fragments of the door leaf and box. Designs with magnets withstand temperature fluctuations well, they do not require lubrication.

This suggests that magnetic latches can be used not only for interior doors, but also for external ones - for example, balcony doors or those that go to the veranda.

It is very important to choose the size of the mechanism. Attention should be paid to its length, especially if the door leaf is equipped with glass or metal inserts. The width of the lining must be less than the size of the door itself. And, of course, one should not disregard the dimensions of the locking tongue.

In order for the door magnetic mechanism to work as long as possible, you should give preference only to products of well-known manufacturers. Professionals prefer the following brands.

In our time, the installation of magnetic closures is gaining increasing popularity among the population. The reason is their numerous advantages over traditional mechanical locks, as well as the ability to connect such devices to the “smart home” system.

Reviews show that magnetic latches are universal - they can be installed on the doors of a children's room, sanitary facilities, into the bedroom and even onto the wicket. Such designs are suitable for wooden and glass cloths, come in different colors (even for gold) and always have the opportunity to adjust the mechanism for the particular features of the door structure.

In the next video is waiting for you inset magnetic lock (latches) mill.

Latches: types and their parameters, design options and installation workshop