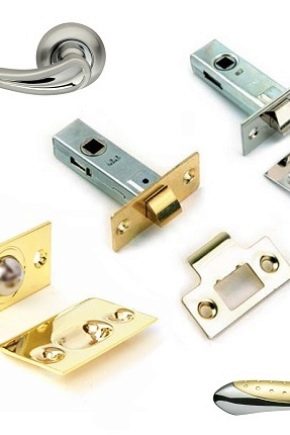 Interior doors have long ceased to be something surprising for many people and have become an integral part of our apartments and houses. Their use makes it possible to clearly delimit the space of several rooms and give each family member the opportunity to protect some territory from the interference of other people.

It should be said that one door is not enough for this. It must necessarily be equipped with such a thing, which is called the door latch.

The device of this element is actually very, very simple. And so much so that, most likely, this factor is precisely the main thing when it comes to the fact that it is quite durable.In the handles for the door of this type, a fixation method is used, which is widely used in various furniture. The essence here is very simple, and it is worth considering it on the example of one of the methods. Namely the method that is mentioned above.

The constructional basis is very simple in this case and consists of two magnets, which should be as powerful as possible. They will be classified as permanent, which is why there is no need to supply electricity or anything else. One of these magnetic elements will be located directly in the handle itself in the form of a bolt, which is fixed in the groove located in the door frame. And the second magnetic element is located in the groove, which is located right on the bottom.

The principle of operation is that if 2 magnets with the correct polarity are positioned at a small distance from each other, then they will be attracted. This process will be carried out when the door is closed. When the distance between the magnets will be minimal, the magnet located in the door frame will attract the lock bolt to itself, then just pull or push the door will not work.

To open, you first need to unlock the mechanism, which can be done either by tilting the handle or turning it. This makes it possible to pull off the bolt and carry out the separation of the magnets. When the sash is opened, the magnetic elements will again be at a certain distance, due to which they will not have any effect on each other. At the same time, the bolt will not peek out or protrude from the lock case, but will firmly and efficiently be fixed inside.

It should be said that recently began to release such a small magnetic latch type that they will be no more than conventional ball solutions.

If we talk about the basic requirements that apply to such an element, then it should be noted that in our time they have become tougher. The reason is that hackers come up with new and new ideas on how to get around such protective solutions, despite the fact that this is a simple protection for interior designs, not exit doors. If we talk about the basic requirements for such elements, then the following should be mentioned: 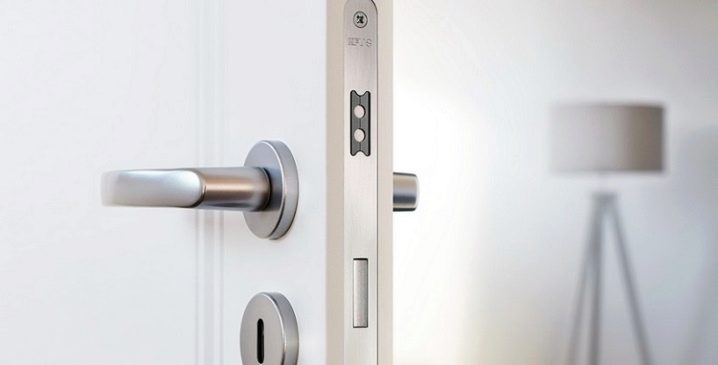 Now it is worth talking about the types of latches in question. It should be noted that their installation is carried out only on a swing-type door, but for a sliding solution, another furniture type is produced. Door latches can be of the following types: 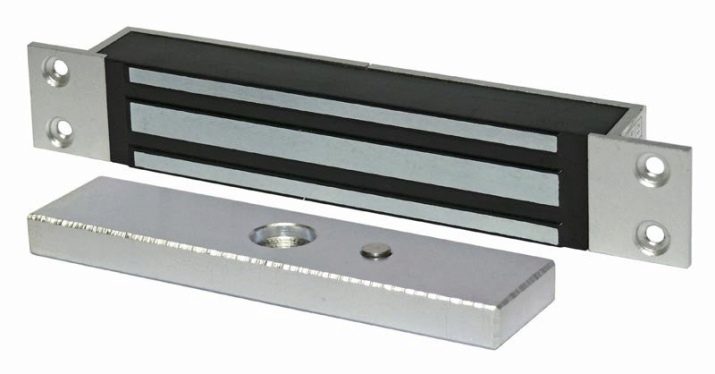 Each type of latch should be considered in more detail. In order to close the door with a flap-type latch, it is necessary to apply some effort, where the oblique tongue should slip along the response plate and after snapping in, the door leaf will lock. If such a mechanism is mounted correctly, then the door can be opened only after clicking on the handle or turning the key. Installation of handles can be carried out both from one, and from two parties. Such a mortise swivel latch can get two locks: one will open thanks to the handle, and the second will work as a latch. The handle of such mechanisms not only performs its function, but also decorates the door. 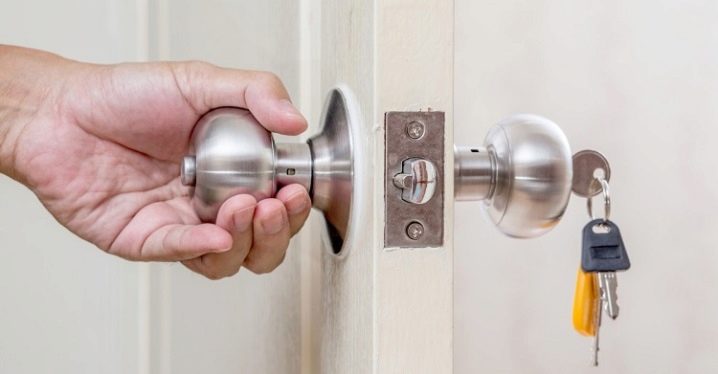 If we are talking about a roller type, then here the role of a bolt will be either a tongue, bevelled on both sides, or a special roller that rotates. Such a latch can be both on the box and on the door leaf. When it slams, the spring-loaded roller enters the hole on the planochka opposite, and locks the leaf in the closed position. Such a latch can be mounted on the door box and on the canvas itself.

When the door is covered, the spring roller is in the hole located on the response plate, and allows you to lock the leaf in the closed position. By the way, this type of latches can be mounted as a separate device both on the pendulum and on the swing doors. With other details that are on the lock, it is not connected in any way. It is impossible to completely close the door with the help of such a latch, because if you press on the door, it will open.

Magnetic latch works on the principle of a magnet that attracts metal parts. Typically, such silent solutions are used in both office and residential premises. This option allows the fixation of the sash in the closed position, and in order to open it, you should make a certain effort. The first part will be installed on the canvas end, and the second - on the door frame. When the door is closed, the magnet is pulled up to the counter plate made of metal, and the canvas fixes the door in the closed position.

Another type that should be mentioned is a sliding latch. There will be presented not only a latch, but also a lock.Such decisions are made without handles, so they can be opened exclusively from the inside either with a turntable or with a key.

Almost all such solutions are equipped with a lock, which, if necessary, makes it possible to hide the spring bolt in the snap-fit ​​housing. When it is hidden and locked, you do not have to worry that the mechanism will automatically close. 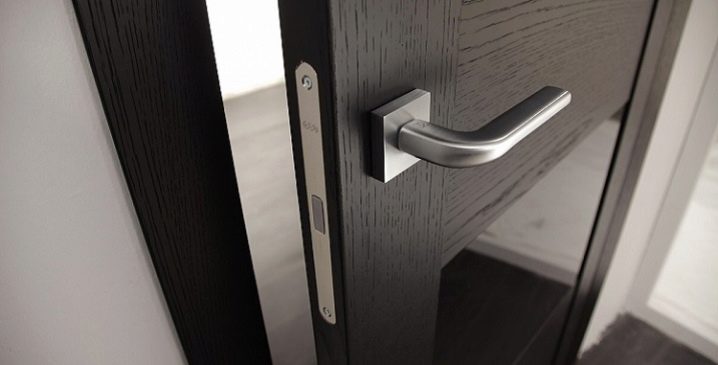 An electric or electronic latch makes it possible to remotely control the doors, for which reason they are usually mounted on gates, as well as at the entrance to some premises that are guarded. It should be said that for such latches need self-powered. The reason for this is that in the absence of electricity, the latch will be in the open state. By the way, it is worth noting that the electric latch also has a mechanical part.

In general, this category of latches is divided into several types.

The door ball latch is a universal solution with a lock that is suitable for any doors: plastic, frame, glass, aluminum, wooden and metal. But for sliding or pendulum, you can also use such a mechanism. But if we talk about the appointment of doors, then there are no restrictions at all. Moreover, almost any latches can easily coexist with locks. In general, convenience and practicality.

As an example, it can be said that when mounted on a door to a nursery, a child can easily enter or exit independently. At the same time, the other types of latches mentioned above may require turning the doorknob, it will just be hard for the child to do this and get to where it should be.

But nevertheless it is necessary to make a choice depending on what door and where it leads. For example, for the front door latch is better not to neglect and select the most reliable option. And for the bath or toilet door, you can use magnetic, sliding or roller latches.

In addition, much will depend on the manufacturer of the latch. For this reason, it is better not to save money and purchase products exclusively from well-known brands that have long established themselves in the market.

It is worth considering how to directly install the lock and the handle to it in the door of PVC or any other. If a person has at least elementary skills in carpentry work, then he will not have any problems with mounting the latch. To implement it, you should have the following set of tools at hand:

To install the latch yourself, the process should be divided into several components.

It is also worth considering how the installation of the latch is carried out. First, on the door leaf, there are marking locations for the latch for self-tapping screws. Now the locking mechanism is twisted into place, which was previously prepared.

Opposite the latch that was installed on the door frame, you need to fasten the counter element. By the way, it will not be superfluous to drill holes for screws in advance.

It often happens that the door latch is broken or stopped working as needed, which is why it became necessary to parse it. This is usually necessary in the following cases:

The sequence of work may vary depending on the category of the installed latch, but approximately it will be as follows:

After that, it is necessary to establish the reasons that led to the malfunction, namely:

In the next video you will find the repair of the door latch.

Latches: types and their parameters, design options and installation workshop