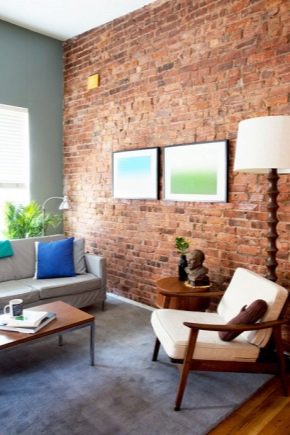 One of the most interesting decisions that make the interior of the living room as original as possible is the use of bricks.

The decoration of the walls with this material, made skillfully, gives its unique character, effectively decorating the interior of the room.

Everybody can achieve such a result: it is enough to follow simple recommendations, which will be described in detail below.

To date, a considerable number of solutions are known, allowing to draw a brick wall in the living room. If you select those materials that are able to perfectly solve this problem, their list will look like this:

In a situation where the structure is new, the material in question can be used as is, after cleaning it from small impurities. As for the old buildings, their exposed laying should be rid of the remnants of plaster and other coatings. In the future, the surface must be thoroughly impregnated with a protective compound that significantly prolongs its operational life.

This material has a lot of indisputable advantages, among which are the clarity of lines and a large number of forms, as well as many textures and color options. Given this circumstance, it is reasonable to use such a brick to decorate fireplaces, columns, niches and other decorative elements of the interior.

The presented option can "boast" such advantages as practicality, accessibility and ease of use. Another obvious advantage of such a brick is its lightness, which is primarily important for decorating plasterboard walls.

The use of this material is justified in situations where the owners of the living room have a minimum time to transform it. It is an imitation of brickwork, a distinctive feature of which is the wealth of the proposed design options.

It should be added separately that with the help of wallpaper “under the brick” it is really possible to get both a smooth and textured surface.

The second solution involves the use of embossed wallpaper - a material that can replace natural brick in the best way.

Experts note that the most suitable areas for brick are:

In addition, the design of the living room described material is important for many other popular styles. In particular, the use of bricks suggests areas such as Provence, Country and Kitsch, as well as fusion, effectively combining the features of any, even very dissimilar styles.

To make the brick wall look as organic as possible, bringing beauty and originality into the living room interior, the owners of the premises should pay special attention to its design.

To solve this problem, it may be useful to consider the following useful recommendations:

Experience shows that in this way it is possible to truly transform any wall of the living room - larger or smaller, in whole or in part. It is worth mentioning and such a stylish solution, as the design of a brick one of the corners of the room.

If increased attention will be focused on the transformed surface, then it is desirable to choose the wall that is opposite the source of natural light.

In addition, you should not overly close a brick wall with furniture, accessories and other elements of the interior. Ignoring this recommendation, the owners of the premises risk reducing the effect of the decorative surface they have created.

In addition to the aesthetic, the brick wall in the living room plays another role - functional, the significance of which is no less.

It can bring many benefits in the following qualities:

Another stylish solution is to use a brick wall as the basis for a fireplace, making the living room even more comfortable. In addition, this surface can play the role of the background for one or several shelves with souvenirs located on them.

Having relied on the design of the living room wall brick, homeowners can realize many of their fantasies - from elementary to those characterized by increased complexity.To do this, it is enough to observe the rules listed above, each of which regularly confirms its viability in practice.

To learn how to make a brick wall in the interior with your own hands, see the next video.

How to make the living room in turquoise?

Design a living room with a fireplace in a private house

Choosing hinged shelves in the living room in a modern style.

The color of the walls in the living room: good options for home and apartment

How to arrange a living room in the Scandinavian style?

The subtleties of the living room design in blue tones