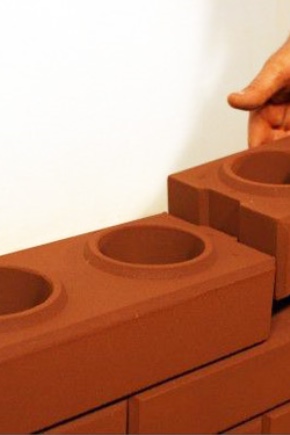 Brick "Lego" - building brick, in form similar to the children's designer of the company "Lego".

It is made by hyperpressing the product, which is formed as a result of sifting of rubble in fractions and passing through special sieves, and it has special grooves of formation. Thanks to these grooves the construction process will be very fast.

Types of Lego Bricks discussed in detail in our other article.

We will focus on the most popular form in Russia.

In one cube - 500 bricks. To assemble 1 cube of Lego bricks, you need 15 kg.tile adhesive for exterior work.

Types of bricks "Lego" discussed in our other article.

As raw materials for Lego bricks, waste from the crushing of limestone rocks, volcanic dust or sand is suitable. Moreover, the smaller the fraction of raw materials, the higher the quality of bricks. If the raw material consists of fairly large particles, then you can crush it - then the quality of the brick will be no worse. 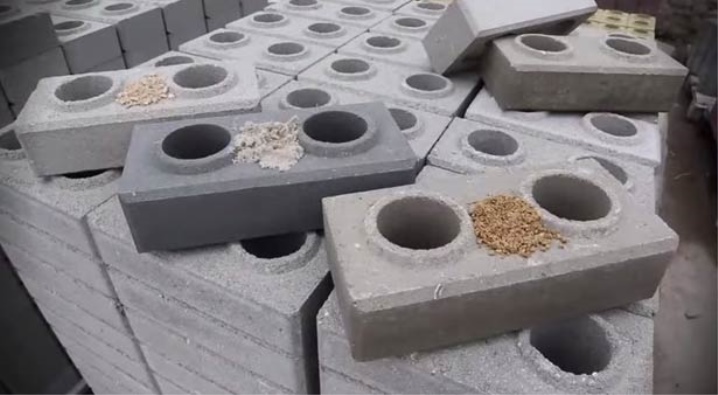 Advantages over other types of bricks:

You can also pour the concrete mixture into the holes instead of using glue. This will reliably strengthen the structure.

For greater clarity, see the following video, which details the Lego brick.

There is a way to save during construction.

You can not buy ready-made bricks, and buy equipment for their production. You will need to buy a machine and raw materials. As a result, you will have your production of lego bricksand since there are practically no competitors now, the prospects in this business are very good.

Even if at the end of construction Lego brick equipment not needed in the future, it can be leased or sold.

The proportion of raw materials for Lego bricks:

The dimensions of the machine allow you to work in the garage. Its main functions are:

The approximate cost of one brick - 4 rubles. One person can produce about 2000 bricks per 8-hour working day. But be sure to take into account the time for technological breaks and rest of the employee.

The time of brick formation is from 4 to 12 seconds, depending on the quality of the raw materials used (size of fractions: the smaller, the better). On the removal of bricks takes about 3 seconds.

On average, taking into account technological breaks, the time for loading of raw materials can be made 4-5 bricks per minute.

Machines can be both electric and manual. How the machine looks like, you can look at the following photo.

All brick turns out the correct geometrical form. Brick "Lego" is ideal for buildings such as toilet, shower.

We just want to warn you that no guarantees can be given for a long time in a harsh Russian environment, no one can give. Since the creation of the first buildings of Lego brick in Russia, too little time has passed.

Information about the possibility of building a house is written according to the manufacturers.

When building a house, Lego bricks are placed on cement mortar, using the level for the first layer both vertically and horizontally. The bricks of the following levels can be laid without a level, since due to the insertion into the grooves, ideally even rows are obtained.

After laying several rows, rods are inserted - a special guide wire for stability and rigidity. Subsequent rows of bricks are strung on it.

Then concrete is poured into the holes. The concrete is allowed to dry, after which the armopoyas are poured with the cement mixture.

The void distance inside the wall is 75 cm. It is filled with expanded clay or clay. You can use and min. cotton wool. Due to this layer, a good thermal insulation is created: in the summer in such a house it will be cool, and in the winter - not cold.

When building a house of brick "Lego" does not need primary plaster, as the walls are smooth. Enough finishing putty.

ABOUT Lego brick house read our other article. Learn about the pros and cons, as well as how to buy a quality brick.

So let's summarize. Brick "Lego" will significantly save on construction. Savings are due to lower cost, and the laying can be done without the involvement of specialists. The brick has good frost resistance, thermal conductivity and moisture absorption characteristics. The walls will have good seismic resistance, and also look very beautiful in appearance.

You can read about how to organize your Lego brick business. in this article.

We also offer to see examples of lego brick works.

What is a flexible brick and how to use it?

How to put a brick under the jointing?

How to make brick pillars?

Characteristics of bricks according to GOST
Information provided for reference purposes. For construction issues, always consult a specialist.