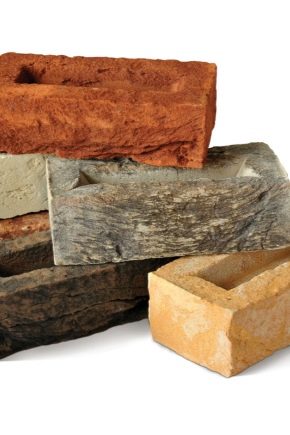 Hand-made brick differs from the usual technical parameters, as well as unusual colors and texture. Such products are mainly used for restoration and interior work (facing furnaces and fireplaces, restoration of old buildings).

The production of clay blocks has its secrets. The formation work may seem simple, but it is a long and laborious process, requiring the master to precisely follow all stages of the work.

For the manufacture of using small clay, well cleaned from impurities. It is extracted from special deposits, it has different colors (white, blue, gray, red). When mixing them in different proportions, manufacturers can achieve any shades. A variety of clay, which does not require additional additives, is considered the most suitable for brick production.

Hand-molded bricks should be made under a shed or indoors. Sifted clay is diluted with water to a state of soft dense mass, which holds its shape well.

Even before the process of placing in the form master manually begins the formation. The prepared mass on the table with the help of the wire is cut into pieces. Each piece must have a size appropriate to the form to completely fill it.

The brick form is a box with a smooth inner surface. These boxes are made of wood with a dense texture, so in the process they are not distorted and do not swell.

Before filling the form, the inside is covered with fine sand to facilitate the extraction process. Also sand helps to achieve the effect of aged brick.After firing, the brick is dropped from about one meter in height, so that small cracks and grooves appear on the surface, which further reinforce the imitation of the "old".

Experts recommend cutting sliced ​​clay into a prepared mold. So the form is completely filled, and the quality of the finished product will increase. Do not add the clay mass in the form, if it was not enough. This will reduce the quality of bricks. When the form is filled, excess clay is cut with a knife or wire.

Then the raw block is carefully removed from the mold and sent to dry. To form the next brick, the form is cleared of the remains of clay and sprinkled with sand again. The next stage of production is drying. This process is necessary to remove excess moisture and preparation for firing. Raw blocks after drying should contain no more than 10% moisture. In the room for drying it is necessary to maintain a constant temperature, it must be well ventilated. Raw blocks are dried from one to three weeks, it all depends on external conditions (temperature, humidity, etc.). Excess moisture can also be removed by blowing blocks with warm air.

The final stage is roasting in a special furnace. Calcination occurs in several stages at different temperatures. First, at a temperature of 2000 ° C, heating and removal of residual moisture occurs. Then the temperature increases to 8000 ° С, the process of sintering and the formation of a complete unit begins. After that, the temperature gradually decreases. The whole process takes more than 6 hours. 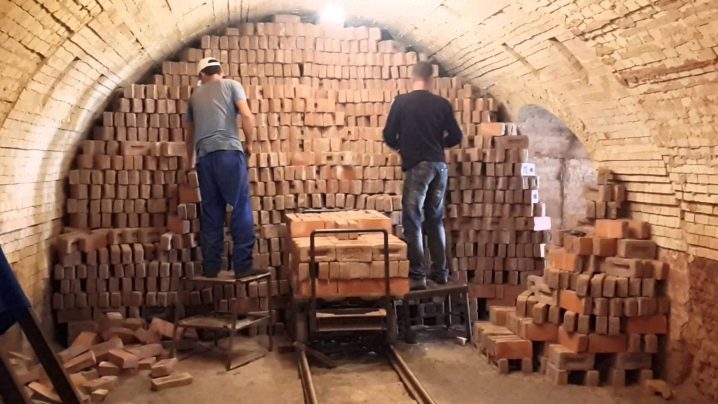 There are two main molding methods in the industry:

In the plastic method, raw blocks are dried before firing for several weeks. If the block is not dry enough, then it can crumble in the furnace. If this does not happen, the quality of the finished product will still significantly deteriorate.

Many manufacturers accelerate the drying process, trying to avoid cracking the finished product by adding impurities to the clay (slate, sawdust, coal). However, a brick made with impaired technology has dark spots on the surface. Such products are substandard and short-lived.

The semi-dry method began to be used much later. It is considered more economical both in time and in investment.To dry the clay used special drums. Then from clay powder knee-lever presses form bricks, which can be immediately sent for firing. This method allows not only to save time, but also to get better products.

In manual molding, bricks are produced in small batches. The process does not require an impressive investment. In addition, the production technology on a small scale is better observed, so the blocks are characterized by high strength and durability.

For the manufacture of bricks manually using a special type of clay - Cambrian. For clinker, another variety is more flexible and more fire resistant. This clay contains little chemically bound water, in comparison with other varieties.

The clinker is molded under high pressure and calcined at a temperature of up to 20,000 ° C. The composition of clinker is lime and salt, which provides strength and prevents the appearance of vysola. Firing at high temperature allows to obtain a dense block without cracks and pores, with a smooth and smooth surface.

The walls of clinker tolerate moisture and sudden changes in temperature. A hand-made brick can collapse when temperature drops, so it is practically not used in the construction of houses. In this case, due to its operational and mechanical properties, clinker is considered the most suitable material.

The main advantage of hand-molded bricks is high strength. For several decades, it retains its properties and appearance.

Other advantages of hand-molded bricks:

The downside is its high price, which is associated with the laboriousness of the process and low productivity (compared to factory automated production).

Hand-molded bricks are suitable for facing pedestals of monuments, building facades. It is used for exclusive design of rooms, finishing of fireplaces, chimney pipes and other interior designs that heat up.It can be put in a door or window opening, you can lay out a fence, column, arch, arch, gazebo or bench.

Hand-molded bricks cost much more than usual. But due to the excellent performance properties, high strength, rich color gamut and unusual texture, it justifies its price. Especially this brick will appreciate the lovers of luxury designs "antique". 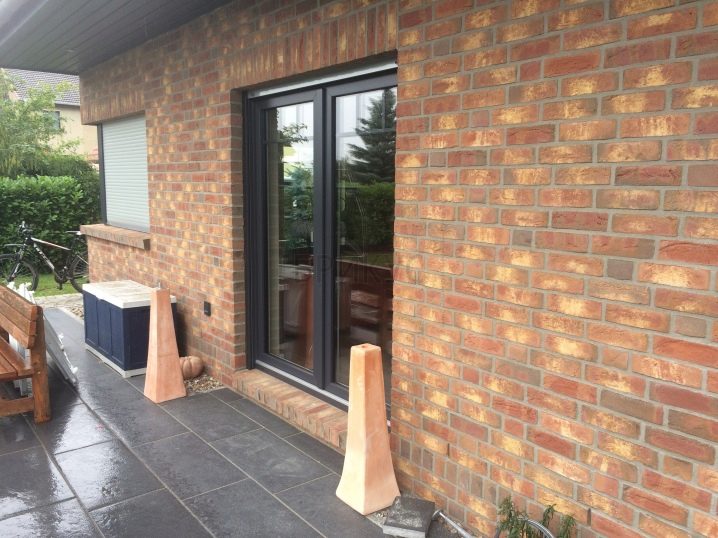 When choosing, consider the following points:

When choosing bricks from a foreign manufacturer, you need to take into account the characteristics declared by the manufacturer, as well as the climatic conditions in which products can be used. Dutch manufacturers produce bricks of all standard sizes that are suitable for different jobs - from building houses to cladding facades. In terms of cost, they exceed analogues, but the parameters speak for themselves: the strength of M100-M300, frost resistance above F100,moisture absorption - from 8 to 10%.

For the conditions of our climate, the products of the German company Muhr, which is of high quality, are suitable.

Advantages of the German brand:

Among the Russian manufacturers stand out "Donskie Zori". The quality of the products is most similar to those of foreign manufacturers. The cost of a brick of this brand is lower than the price of imported products due to the use of domestic raw materials. Products meet Qbricks quality standards.

According to the production standards, a ceramic front brick should have the following characteristics:

The plant “Kerambrok” (Ukraine) was one of the first to set up mass production and began to produce handmade material under the brand name “Ekaterinoslavsky brick”. Each copy is unique in its own way, since the entire manufacturing process is done manually by craftsmen.

Trading House Petrovsky Brick (Russia) relatively recently began to produce handmade bricks (since 2015). Brick blocks are made in the European format, in accordance with all requirements. The company is constantly expanding its range of products, is engaged in the manufacture of products according to individual parameters, has a stable dealer network. She has already entered the markets of neighboring countries.

Read more about hand-molded bricks in the video below.

Features and technology of production of raw bricks

How much does a brick pallet weigh and what does the weight depend on?

Hyper-pressed bricks: features and recommendations for use

The use of white decorative bricks for interior decoration

Decorative brick: use in the interior and tips for making

Gypsum brick: features and application in the interior