Features and ideas for separating the kitchen and living room 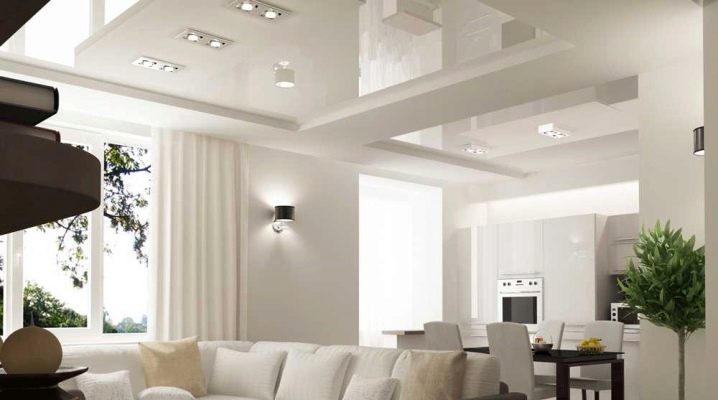 In modern apartment buildings, it is very often possible to find such a layout of apartments, in which the kitchen is combined with the living room in one room.

Most often these are the so-called one-room studio apartments, however, in a two-room or multi-room apartment, you can also sometimes find such a combination.

Any layout has its pros and cons, it all depends on what specific functions are assigned to it. Someone uncomfortable in a small and dark room, and someone prefers that each family member has his own, even a tiny corner. The combination of kitchen and living room has certain advantages over the classic interior.

Most often, these advantages outweigh the possible disadvantages that arise when connecting the kitchen and living room.

Of course, the significance of these shortcomings for each person may be different. Someone more important is a big space and a little noise is less important, and someone will not be able to safely be in a room that smells like cooking food.

In this case, each buyer and landlord must make a choice based on his idea of ​​the ideal apartment.

In which rooms is the combination justified?

Even if you remove the wall that separates the kitchen from another room, you really want to, it is not necessary to do this in the newly acquired apartment. There are several types of rooms in which such a layout will look appropriate and at the same time be functional.

It is sensible to assess the volume of rooms and the internal layout of your own apartment before you begin to prepare for the repair. If possible, visit friends or relatives who have already organized such a combination in their home or apartment and appreciate the convenience of the design. You can read online reviews of satisfied and not-so-good hosts to decide on the final decision.

The main thing is to remember that despite the various recommendations of designers and ordinary users of the network, it is worth doing only as it is convenient for the residents themselves.

Even if the wall between the kitchen and the living room was dismantled, and the two rooms are now joined into one, it is best to limit the cooking area from the rest of the room. This will give the interior a more modern and complete look, and in addition, the restriction may be in the form of various shelves or furniture items that are not only beautiful, but also bear certain functions.

One of the classic methods for separating the kitchen and living room is the bar counter. It can be mounted as an independent piece of furniture, or it can be a continuation of the wall. It is necessary to plan a rack made from the part of the wall that previously divided the rooms at the planning stage of the repair.

Such a stand can replace with itself even the largest dining table, and besides, it will serve as a work surface for a small kitchen.

Zoning of various zones in a room can be done by raising individual parts of the floor to a height of 15-20 cm or even higher.Thus, a seating or cooking area can be located on a small podium when the rest of the room has a normal floor level.

From the parts of the wall, you can mount a massive arch, separating the kitchen from the dining room or living room. In addition, such an arch can be placed closer or farther than the wall that was demolished in order to reduce or increase the cooking zone, respectively.

Most often, these arches are made of plasterboard, but you can mount it from brick, wood or other building materials.

Instead of a real wall, you can make a thin partition that covers part of the kitchen area. It can be made of wood, glass and even thick paper. Such paper partitions in the Japanese style look especially good when the rest of the interior also has an oriental bias. You can hang a small curtain of thick fabric or long beads that will separate the living room from the dining room. In a large room will look beautiful such a canvas, woven from LED threads. At any moment the usual partition turns into a real festive garland.

In order to zone a room, it is not always necessary to completely rebuild a room or erect various partitions. Sometimes it is enough just to decorate the walls or the floor to separate the sleeping area from the kitchen. In addition, color separation can help with this task.

So, for the kitchen, you can choose a warmer and bright colors, and arrange the living room in a more calm and cold tones.

Whichever option the landlord chooses, the main thing is the quality of the repairs and the convenience of all tenants. The house should remain the place where you want to return. 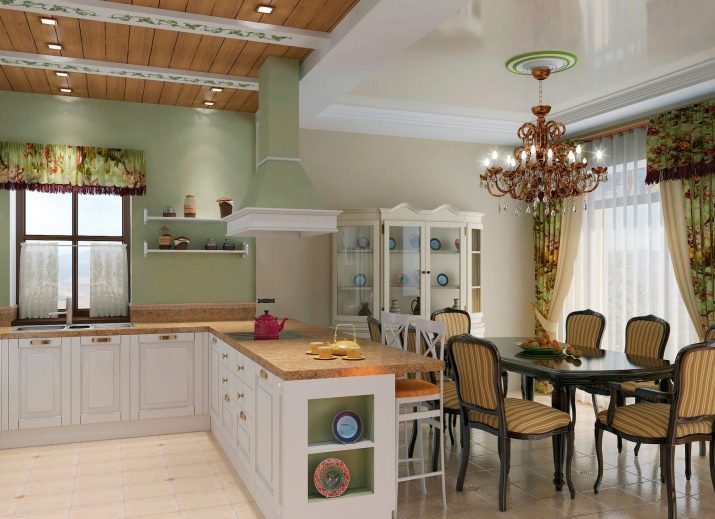 The project of the kitchen-studio is in the next video.

Features and types of partitions between the kitchen and living room

How to combine the kitchen with the living room?

Ways to zoning the kitchen and living room

Ceiling design in the kitchen-living room