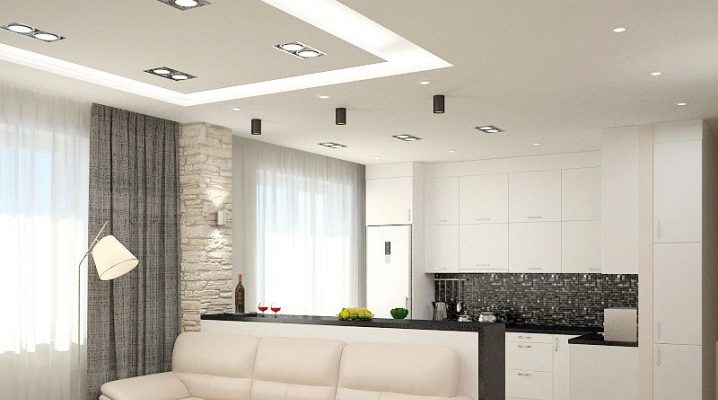 In the redevelopment of the kitchen and living room there is a lot of positive features. People who like to collect guests, organize a feast, the expansion of space will seem a blessing. The number of guests can be increased several times at the same time, and food and drinks will be “at hand”, and you won't need to run to the kitchen every time. There are also other advantages in such transformations, and there are many more than disadvantages. 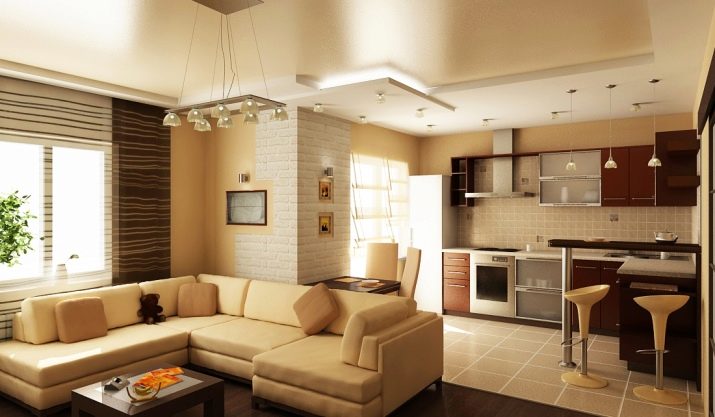 The advantages of combined rooms

There are small kitchens in a variety of houses built during the Soviet era. To arrange a New Year's feast, people usually gathered in a large room. If you tear down the partition between the kitchen and the large room, then there is a noticeably larger usable area. The advantages of combined rooms are obvious:

The popularity of planning with a kitchen-living room in apartments and private cottages has increased markedly over the last decade. Fashion came from European countries, where in the 80s of the last century apartments appeared, where, in general, no partitions were provided for.

This trend has its undoubted advantages: the combined kitchen or dining room and hall provide more free space. You can qualitatively equip housing, which becomes, indeed, comfortable and elegant.

If the wall between the rooms is a carrier, then all projects will have to be put on the back burner. Bearing walls are inaccessible taboos, it is categorically forbidden to touch them under pain of harsh legal prosecutions, gigantic monetary fines. If the owner persists in his illegal aspirations (this also happens), he can simply lose the apartment.

The absence of a partition between the kitchen and the living room means that all smells during cooking will get into the room. To solve this problem is possible only with a good ventilation equipment. But also the work of kitchen appliances, namely: a mixer, a coffee grinder and a blender, can distract and interfere with those who watch TV in the living room or are engaged in the design of a term paper.

Design decisions on the arrangement of the kitchen and living room can be a huge amount.

Modern materials allow you to create any interior living space at the highest level. Most often used for this:

Often used a palette in which there is in large quantities white, this is a safe move to give the room ease, lightness and grace.

But excessive use of white is also fraught with "loss of form", the transformation of the dwelling into a branch of the operating room or the dentist's office.

Sometimes the borders of the room are marked with black or dark brown tiles on the floor, the kitchen apron is made contrasting, prolonging it to the ceiling.Often alternate white background and various woody elements of a light yellow color. Also, color accents are made using:

Contrast combinations never go out of fashion, the demand for them is always present. The reason is very simple - they give:

One of the most popular styles in our time is high-tech, the fashion for it does not pass over the past two decades. The secret of this popularity lies in the following features:

Young people up to 40 years old are very impressed with this style, especially if they work in the high-tech industry. It is here that “breakthrough” ideas, the dynamic development of the industry, arise most often.

High-tech characterizes the simplicity of design, the dynamics of forms, there are no excesses and sybaritism. Drywall and metal cladding are actively used. The walls may not even have an additional finish. Living quarters are often filled to the brim with various computer and home appliances.

Despite the active development of high-tech, classic style does not go out of fashion for several centuries. He can acquire different "faces", speaking in a different thematic stylist.

In our time, the trend is the Renaissance era of Catherine de Medici and Leonardo da Vinci. The excesses of style create an excess of comfort, creating abundant natural lighting of the room.

The charm and vitality of the classical style is that it is creative, constantly fed by new ideas, is able to dynamically change, while maintaining its “generic” features.

Creating an interior in the Baroque or Empire style is an enterprise that requires considerable financial investments. The premise for the realization of the ideas of the classics also requires a lot, from 35 square meters. This fact can explain why the classic is most often found in large country houses, where there is space “for maneuver”.

For proper zoning of the room there are several proven methods. First of all, the floors are covered with different materials. For example, in the kitchen the floor may be of porcelain stoneware, and in the living room it may be covered with linoleum or parquet.And also often the kitchen raises centimeters by 8, making it like a small dais. Two-level ceilings can be made in the room, which is also an element of zoning.

With this method you can also push the size of the living room to the maximum, “leaving” the kitchen just a couple of square meters. Zoning is effective, it really helps. Plastering and painting walls, installing wallpaper - this can all be effective zoning tools. Sometimes in the rooms or in the kitchen the walls and ceiling are revetted with mirrors.

This method helps to "push" the space of the room, with a professional approach, the effect can be effective.

An important place in the idea of ​​zoning is given to LED lamps. If the ceilings are more than three meters, then you can make ceilings in several levels. With the help of light from the LEDs, you can make different lighting, "narrowing" or "expanding" the space. In some cases, make the sliding shutters (or curtains), which can at the right time to isolate the kitchen and living room. Such devices can "work" in both vertical and horizontal planes.

Selection and placement of furniture

Technically, it is easy to remove the wall between the kitchen and the living room, difficulties begin when you need to arrange two rooms. Before embarking on work, you should understand what, in fact, should be done. It is better to focus on ready-made projects: when there is a “point” to which one should strive, then it will be much easier further. People who understand the construction, often implement their own projects on their own. This approach has the right to exist:

Knowing all these parameters, you can choose the right combination of furniture, home appliances and everything else.

You can decorate a new area in a single color range, often also make distinctions, the kitchen can be, for example, in light yellow tones, and the living room can be light green. In any case, there is a single order of the project. First, a plan is drawn on the computer.Immediately, you should mark where the furniture will be located.

In order to separate the kitchen and living room, without erecting walls, there are many tricks. Most commonly used:

A necessary “tool” in zoning is also the use of a different color palette. Compliance with the principle of the "golden mean" is very appropriate here.

In the case when redevelopment takes place in a new house, then such work is much easier to carry out. Their cost will be noticeably lower.

Computer programs make it possible to create a volumetric project on the screen “as alive”, selecting the necessary shades and “putting” furniture in the virtual space. An illustrative picture can be achieved with a large proportion of approximation. In the old houses it is necessary to do pre-costly dismantling, so here the costs of creating a project can be significantly higher.

But it should also be borne in mind that there are certain rules, such as:

It is important to drywall, which allows you to solve many issues in the redevelopment of the premises:

Proper placement of the refrigerator, sink, stove near the window will greatly facilitate the preparation of dishes, at the same time less cooking products will fall into the living room. You can do the job for relatively little money by implementing the budget option. 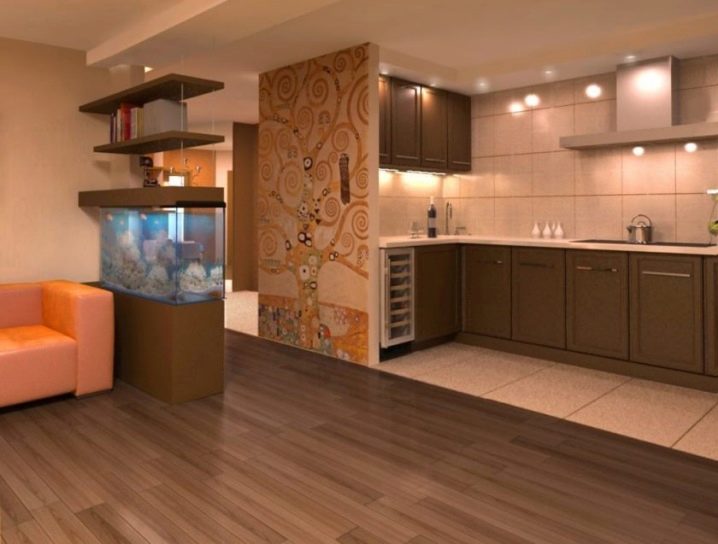 5 tips for the kitchen-living room, see the following video.

Kitchen in a private house, combined with the living room: how to properly plan and arrange everything?

Design and design of a kitchen-living area of ​​16 square meters. m

Features and types of partitions between the kitchen and living room

How to combine the kitchen with the living room?

Kitchen-living room design with a bar