How to choose a lamp for a suspended ceiling? 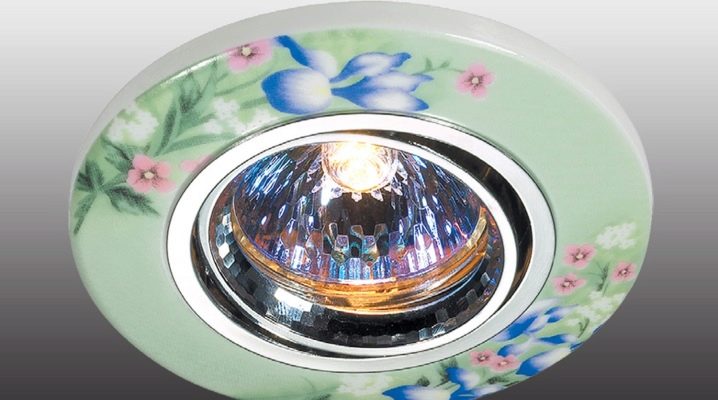 It is better to entrust the design of the lighting for the suspended ceiling to professionals - an interior designer or electrical engineer. However, if you prefer to do this work yourself, then you probably will need information on how to choose not only suitable ceiling lights, but also lamps for them. It is about them that will be discussed in our article. 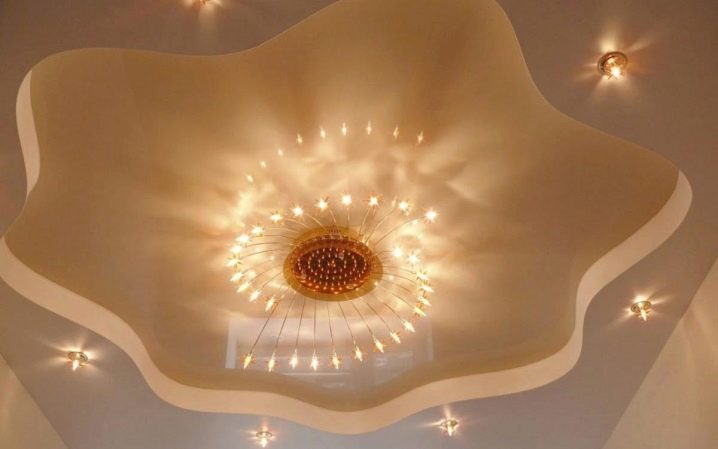 After the walls in the room are plastered, the electrician proceeds to the installation of electrical wiring, and places electrical outlets for future fixtures by tags or by design. After all the draft and finishing work on the walls has been carried out and the suspended ceiling has been mounted, proceed to the next stage - the selection of lamps for ceiling lights.

Examples of suspended ceilings include drywall constructions., tiled models, cassette type options, rack, stretch. The suspended ceiling gives ample opportunities in the choice of a form and a design both the covering, and ceiling lamps and lamps to them. 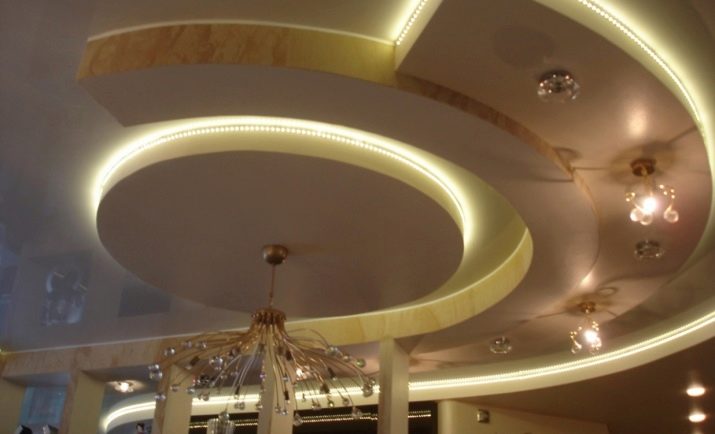 Currently, lamps for suspended ceilings can be divided into several categories according to different functional characteristics. Depending on the type of light source, the following types are distinguished: halogen, LED, fluorescent, incandescent, energy-saving. The peculiarity of their choice depends on several factors: appearance, security, direction of the light flux.

Such lamps are filled with buffer gas. Despite the fact that halogen bulbs are environmentally safe and have a long service life, they have high heat emission and do not save energy consumption, so it’s better to install them in places where light is needed periodically. It can be a bathroom, toilet, dressing room, hallway.

Inside the bulb is a metal spiral surrounded by halogen vapors of either iodine or bromine.Due to this, the metal from the helix does not evaporate, and the life of the lamp is significantly increased. 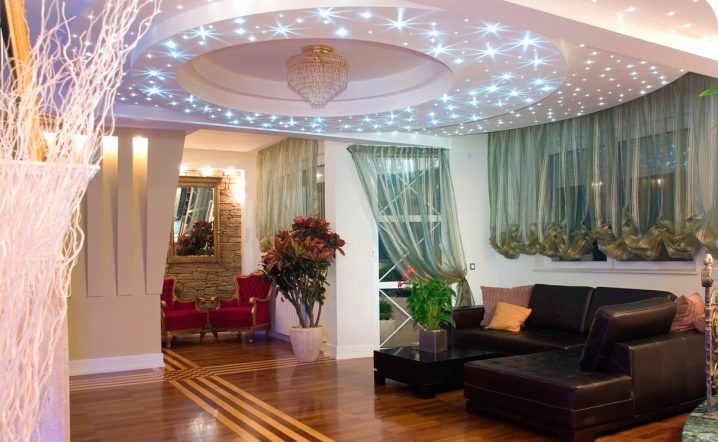 However, they also have certain disadvantages. 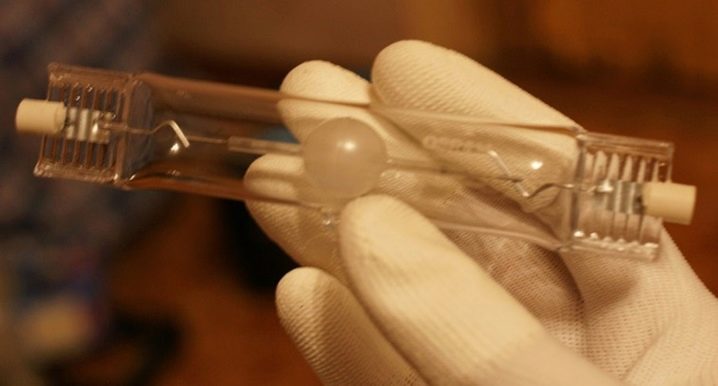 The safest and most economical option in terms of energy consumption. Despite the fact that it is quite expensive compared to other types of lamps, they have a very long service life (15-20 years), are not sensitive to voltage surges, are durable and do not heat up.Due to their safety, such light sources are recommended to be installed in children's rooms, as well as in places where family members spend the most time, for example, in the living room, office, in the kitchen of an apartment or house.

For a suspended ceiling - this is the best solution. These bulbs have many advantages and only one minus.

The only negative is the higher cost compared to all other types of lighting. However, the high cost is fully justified by the duration of use and the rarity of the replacement. 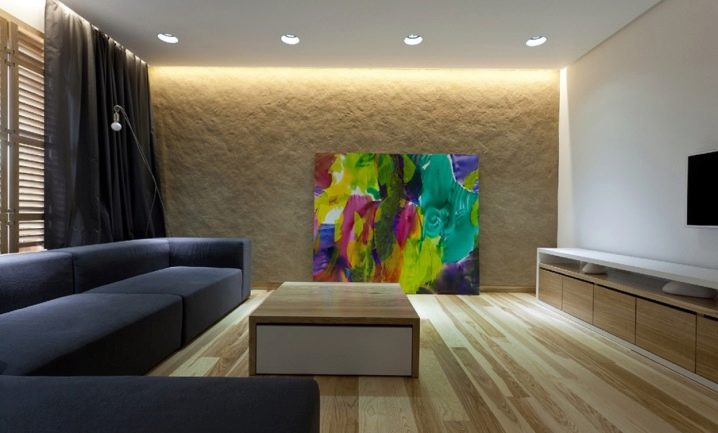 This is the oldest type of light bulbs. For more than a century, the brainchild of Thomas Edison has been pleasing people all over the world. It is a metal spiral enclosed in a vacuum flask.

The advantages of this light bulb, in addition to the antiquity of its invention, include low cost, as well as the ability to operate at different temperatures and humidity.But the minuses are much more, especially in combination with suspended ceilings. 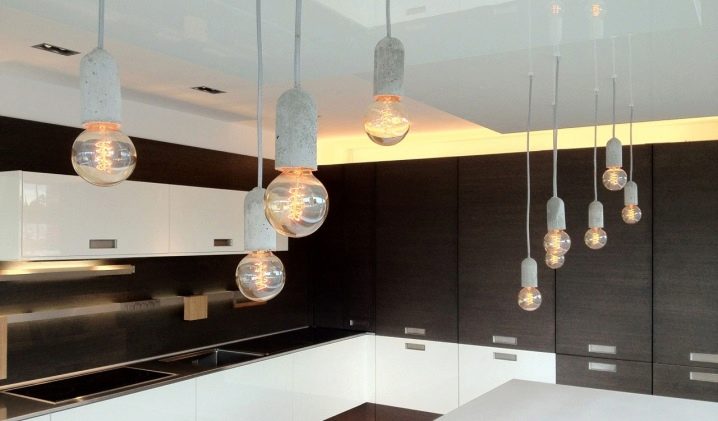 Ecologically safe when used and when disposed of. At the moment, the filament is used, rather, in pendant lamps in the loft style. An example would be a lamp in the form of a large incandescent lamp or light bulbs encased in glass balls for interiors in a modern or high-tech style.

Now let's talk about the cons. 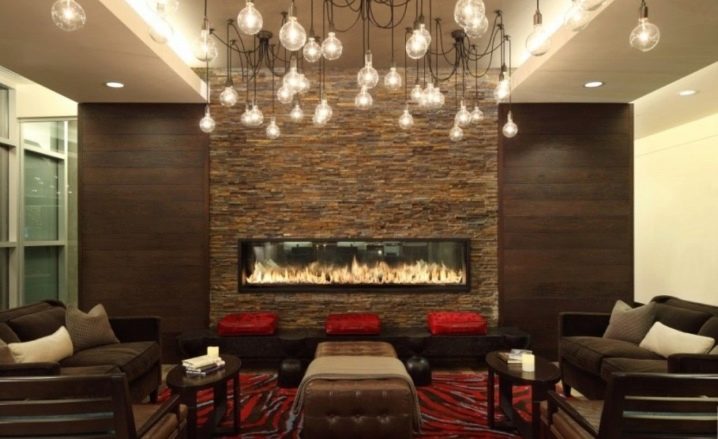 The omission of Edison’s creation in terms of economy was corrected, and these lamps came into being. 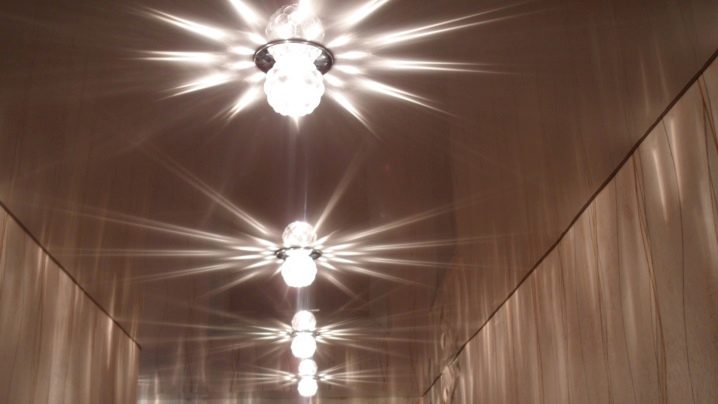 Due to the fact that the bulb of such a lamp is filled with mercury, any damage to it may entail serious health consequences. In addition, this type of lamp is sensitive to power surges and is unsafe for the environment, because they are difficult to dispose of because of the release of mercury vapor.

Despite this fact, they are much more economical than incandescent bulbs and are quite durable. They are recommended to be installed in industrial premises, at the entrances of residential buildings, in warehouses, in basements, that is, where a person is the minimum amount of time. 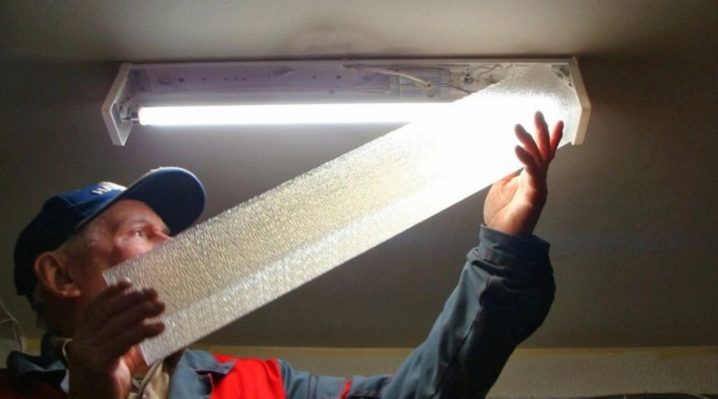 In addition to fixtures that are embedded in a suspended ceiling or mounted using a suspension, there is another option for lighting the room. When installing a suspended ceiling, plexiglass or frosted glass can be used, and the light sources themselves can be positioned both inside the surface (in this case fluorescent lamps or LED strip can be used), and the spotlights can be embedded in the coating itself.

LED strip inside the ceiling can change color. In this case, the surface itself becomes a great source of illumination. In this case, there are three options for lighting: with the help of a luminous ceiling, built-in lamps, or with the simultaneous use of both. 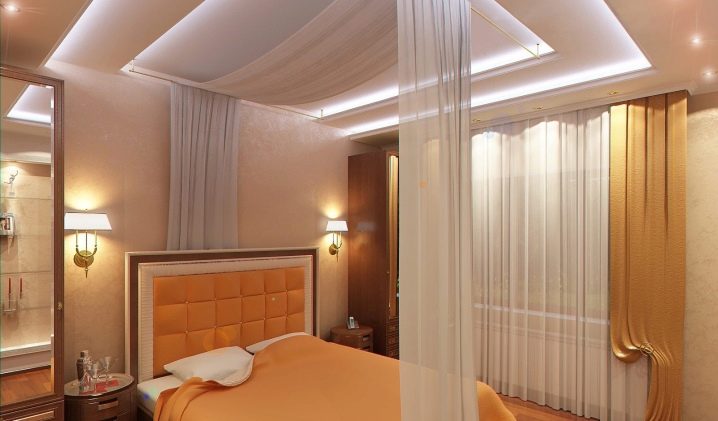 After examining all the light sources on the market, their pros and cons, it can be concluded that the most durable, economical, in terms of energy consumption, and environmentally friendly options are lamps that use an LED lamp. The choice of the manufacturer, method of installation, location, number of lamps depends on their own preferences, the purpose of the room, the stylistic orientation of the interior, the design of the ceiling.Fortunately, the modern choice of lamps and types of lamps to them allows you to simplify and facilitate this task. 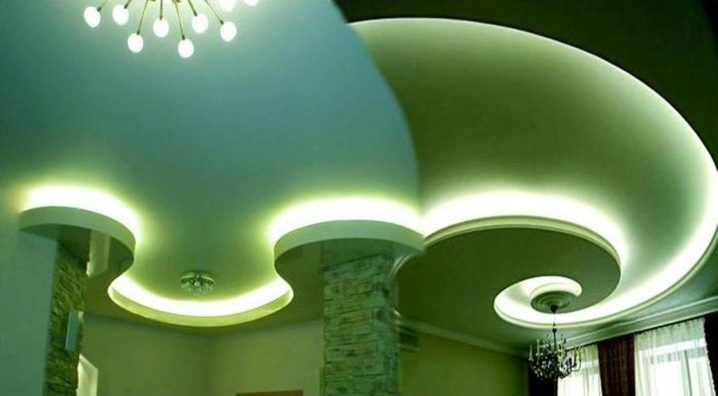 All lamps for a suspended ceiling can be grouped by installation method: suspended, recessed, point, overhead, spot.

It is advisable to install this type of luminaire in public premises in which a large number of light sources are aimed at a specific area, for example, in museums, at exhibitions.Most often, pendant lights can be combined with built-in models.

This type, in turn, is divided into two subspecies: static, with a constant angle of illumination and turning, the angle of illumination of which can be changed. Rotary products illuminate any selected interior area, depending on the direction of the light beam. Static models shine strictly down. Among these lamps you can also find samples of various shapes, colors and sizes. 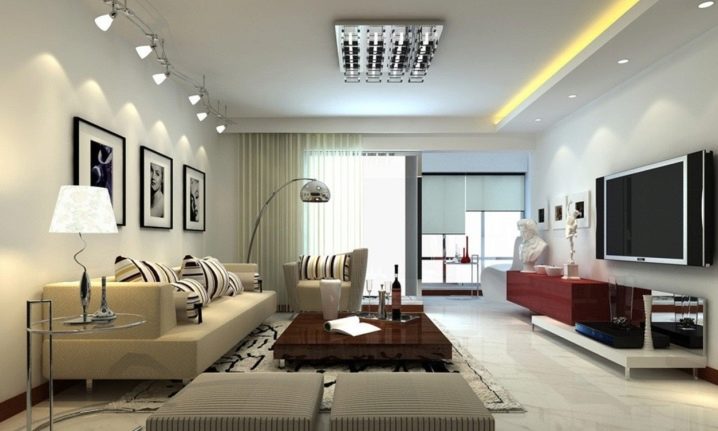 Often, as a decoration, such lamps are complemented by hanging multi-faceted glass balls or other geometric shapes made of glass through which light passes and is refracted. For these models, lamps of different colors and configurations are used, for example, with imitation of a burning flame, in other cases the lamp itself is made in the form of a starfish. 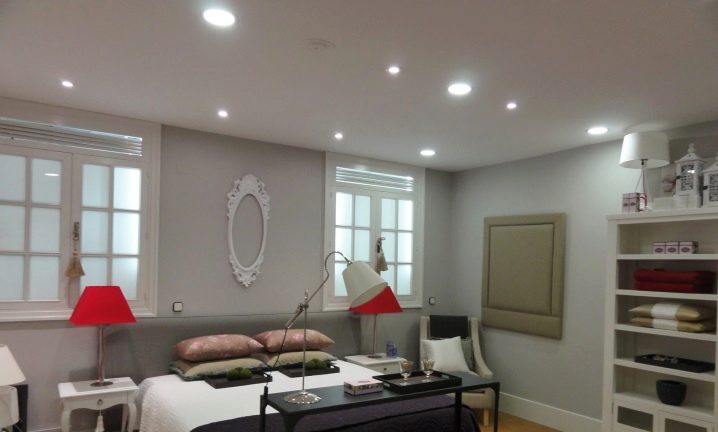 You will learn more about embedded luminaires by watching the following video.

Features of lighting in a wooden house

Lighting in the children's room

Lighting on the balcony