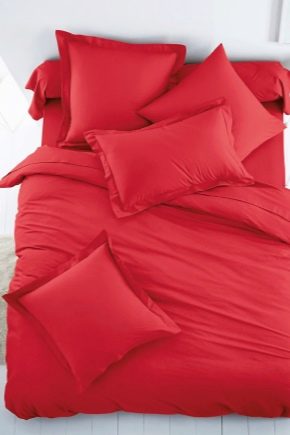 The duvet cover is an important element of the bed set and is widely used as a sleeping accessory in many nations of the world. The first mention of duvet covers belong to the first half of the twentieth century. At that time only rich people could afford it. However, after half a century, the duvet cover firmly entered the household and today almost no bed can do without it. 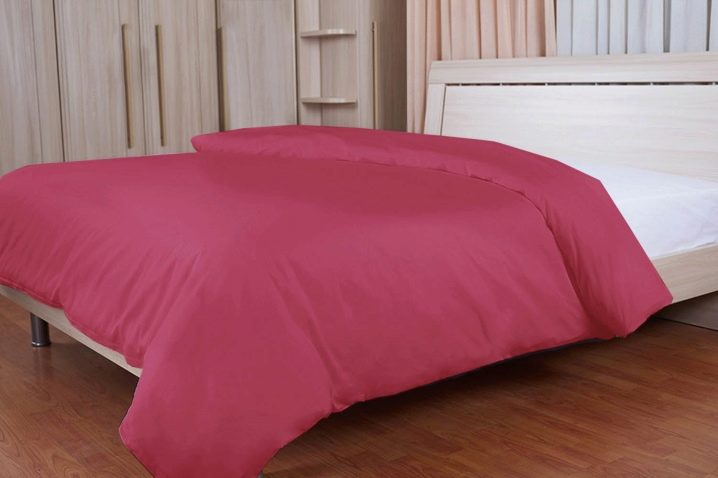 The presence of the duvet cover in the bedding set due to the need to comply with the rules of hygiene.Thick blankets do not dry well and often lose their original appearance, so frequent washing of such products is impractical. To preserve the purity and neat appearance of blankets hostesses use blankets. In addition to the requirements of hygiene, the use of a duvet cover significantly increases the level of comfort in the presence of barbed or slippery blankets. Many synthetic blankets are badly breathable and can cause excessive sweating during sleep. The use of duvet covers creates a thin air gap between the body and the cover material of the blankets, which ensures its ventilation and reduces sweating. 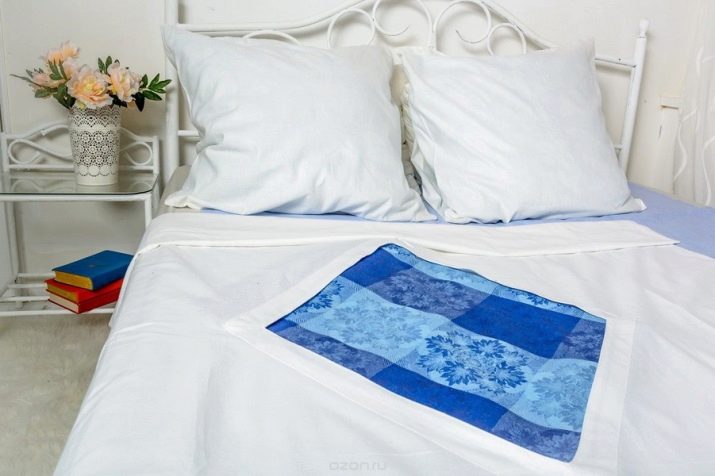 When used as a blanket, thin blankets, the duvet cover creates a multi-layer effect, which somewhat increases the thickness of the blanket and improves the heat-saving functions of the latter by forming air layers. In addition to practical benefits, the duvet cover makes an important aesthetic component in the appearance of the bed. Bedding sets, including, along with a duvet cover, sheets and pillowcases, look aesthetically pleasing on the bed and harmoniously blend together.Duvet covers are classified according to many characteristics, the basic ones of which are the types of cuts, sizes, material, structure and color.

According to this feature, all duvet covers are divided into three types.

The modern market of bedding accessories offers a huge variety of sizes. The choice of the desired product depends entirely on the dimensions of the bed and blanket. So, the standard domestic sizes of one and half-sleeping blankets are 140x205 cm, two-sleeping - 172x205 cm and euro models - 200x220 cm. Children's products are produced in the sizes 140x110 cm or 140x100 cm. Foreign sizes differ somewhat from Russian ones and are designated by letters. For example, a one-and-a-half-size duvet cover of 145 x 200 cm will be marked Single / Twin.Double models 264x234 cm are designated as King / Queen, and labeling of children's duvet covers of 100x120 cm in size will look like Baby bed. 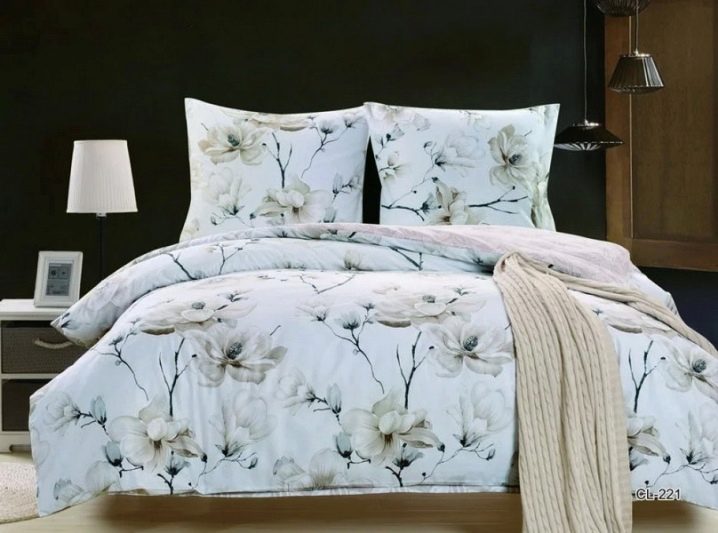 In addition to the standard, often non-standard options. Thus, children's models can be produced in sizes 125x120 and 125x147 cm, the dimensions of teenage single products sometimes correspond to 122x178 cm, and one and a half options can be represented by products 153x215 cm. The ideal size of the duvet cover is the length and width of which is 5 cm greater than the parameters of the blanket. In this case, the blanket will not stray during sleep and will be easy to refuel. 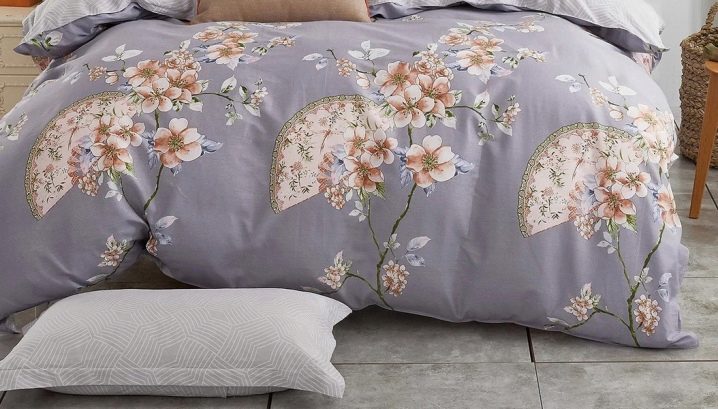 Both natural and synthetic fabrics can serve as materials for the manufacture of duvet covers. Quality products must include at least 60% of natural fibers represented by cotton, silk, flax and wool. The most popular for sewing blanket is considered a number of fabrics. 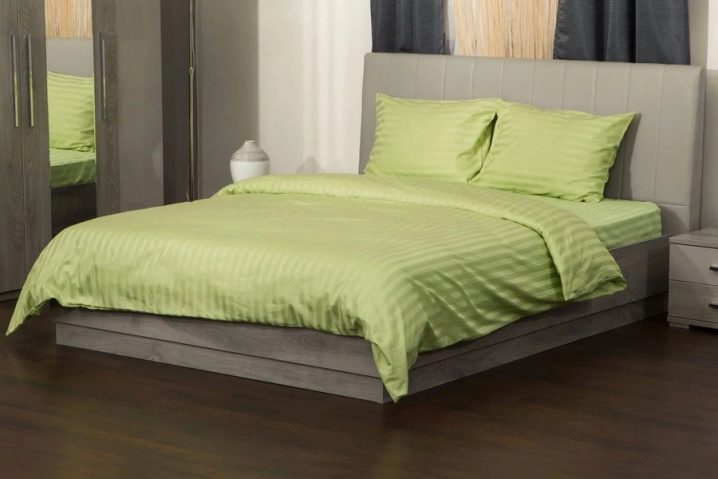 Cotton is the most versatile and practical raw material for making bedding. The ideal option is one hundred percent, without the use of synthetic impurities, cotton composition.Such products are characterized by high density, are not translucent, but at the same time are soft and pleasant to the touch. The advantages of cotton are high durability, the ability to remove excess moisture from the body, ease of washing and ironing, absolute hypoallergenic, non-stickiness to slipping and excellent antistatic properties. The disadvantages include fast color fading and shrinking during washing.

Silk is one of the most expensive fabrics used for sewing duvet covers. The material has a long service life, the ability to drain moisture from the human body and an elegant appearance. Especially beautiful look black and red monochrome models, as well as printed products with photographic images. Silk models belong to the category of winter-summer products, due to their high thermostatic properties. The advantages of silk include resistance to fading and deformation, as well as dirt-resistant properties of the material.

In addition, silk is not an environment conducive to the vital activity of saprophytes, does not break when stretched, and does not accumulate static electricity. The disadvantages include the impossibility of bleaching products and stringent requirements for washing.So, the washing of a silk duvet cover should be done with a special powder at a water temperature not exceeding +30 degrees, and only on the hands. It is forbidden to squeeze and unscrew the product, and ironing should be done only from the wrong side. During ironing, it is not recommended to use a steamer and a sprinkler, as this causes stains on the product and spoils its appearance. In addition, silk models are prone to slipping, so it is recommended to sew in clasps, and equip sheets with elastic bands.

Jacquard is also widely used for sewing bed linen. It consists of cotton with the addition of viscose fibers. The material has a relief structure and looks like a tapestry, but has a smooth texture and pleasant to the touch. The advantages of Jacquard models include high strength of products, the ability to drain excess moisture and good thermostatic properties. The material is not prone to the accumulation of static electricity, is highly resistant to abrasion and dries quickly after washing. The disadvantage of jacquard products is their tendency to form a pellet after frequent washings, due to which the duvet cover will look stale. 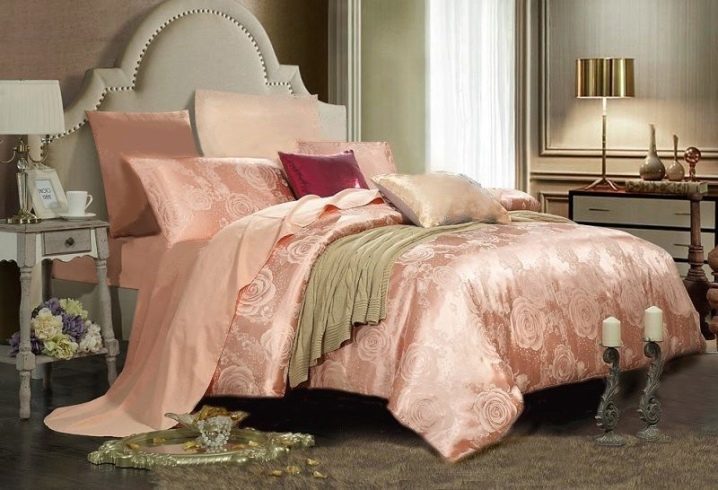 Satin-jacquard is also often used as a material for sewing duvet covers. Fabric differs in a harmonious combination of a smooth surface and relief patterns, beautiful gloss and esthetic appearance. The advantages of the models include the complete hypoallergenic fabric, the ability to use in winter and high strength. Among the minuses can be noted slippery surface duvet cover and unsuitability for use in hot weather. 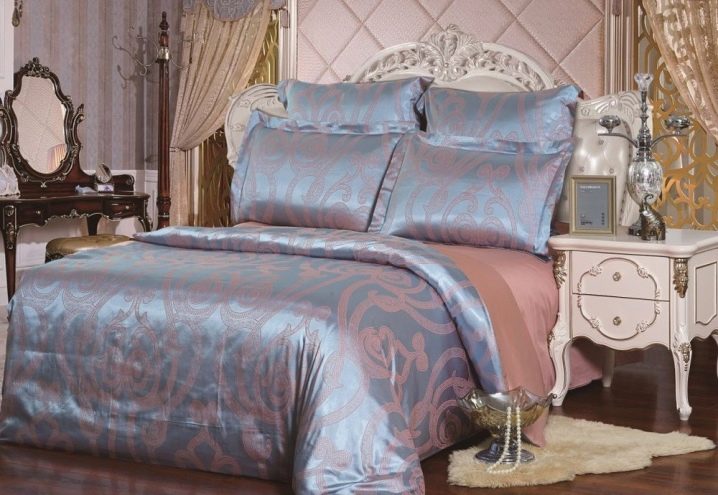 Lyon is a valuable natural material and is distinguished by a certain stiffness and nodularity of texture. Linen duvet covers have thermostatic properties and a moderate bactericidal effect. The material is able to prevent the appearance and reproduction of fungal infections and eliminate inflammation of the skin. Linen bed perfectly absorbs moisture, while remaining dry. Such models are durable, resistant to fading and not prone to the appearance of yellowness. In addition, linen duvet covers with a cutout on the front side look very nice with quilted or warmed patchwork blankets and fit perfectly into the modern interior.The disadvantages of linen models include high crushing and ironing problems, which, however, is more than offset by the naturalness and hygiene of the material. 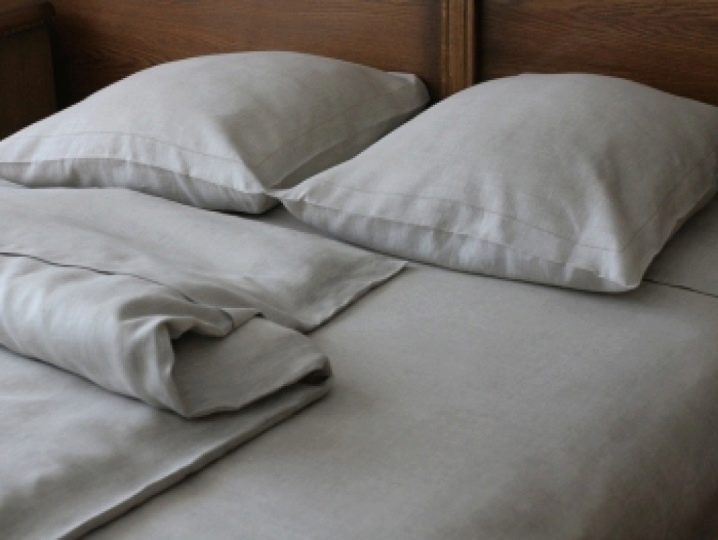 Not less popular are terry cloth duvet covers, which have excellent absorbing properties and do not require ironing. As raw materials for such models can be used as a completely natural materials, and fabrics with the addition of synthetics. Interesting options are microfiber and bamboo duvet covers. Despite their different origins, both materials are pleasant to the touch, weigh little, are hypoallergenic, and are not susceptible to the appearance of fungus and bacteria. 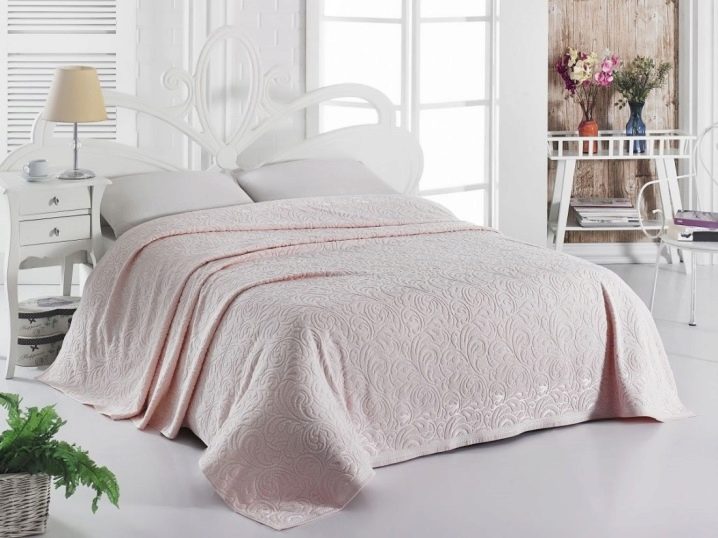 When choosing the color of the fabric, it should be remembered that plain duvet covers of white, pale pink and light blue tones symbolize the state of purity and peace. Black models contribute to the flow of energy, and red products protect against anxiety and anxiety. Green color represents serenity and peace, and violet hues bring eccentricity and experiment into the room. Duvet covers with a small pattern are good for a rustic style, and gray linen models will perfectly fit into an eco-style.Geometric patterns and oriental motifs will bring mystery into the room, while drawings with large red flowers will make you feel romantic. 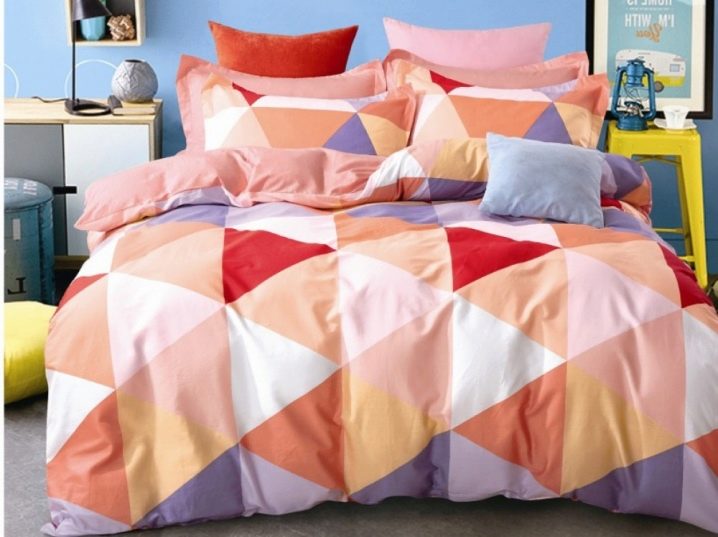 When choosing a duvet cover important factors to consider include: 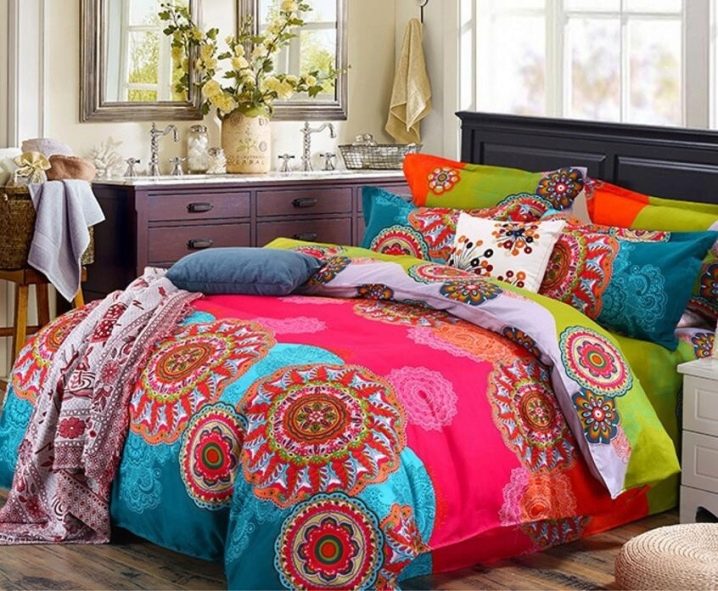 How to choose a duvet cover, see the following video.

How to sew a duvet cover?

What are the sizes of duvet covers?
Information provided for reference purposes. For construction issues, always consult a specialist.