Two-level suspended ceiling in the interior of the children's room 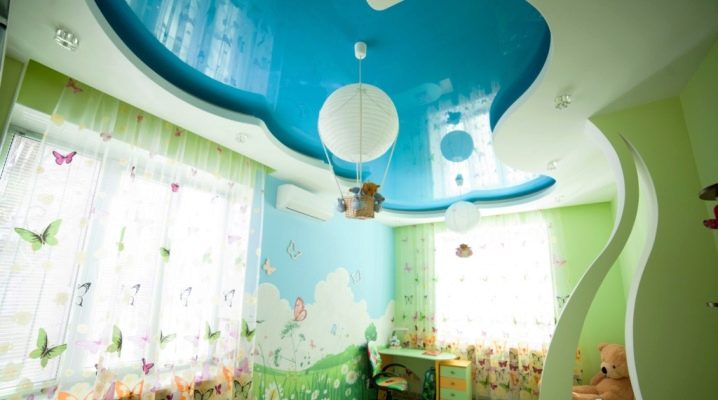 Stretch ceilings today are among the designs that allow to give any room a special look. Due to the stylistic diversity they can be used in the decoration of the interior of children's rooms. However, if the one-level design may seem to someone too simple, the correct design of a two-level ceiling will allow you to radically change the aesthetic perception of space.

At its core, two-level stretch ceilings are nothing more than suspended structures consisting of stretch PVC film and drywall. Attach them to the ceiling on a special metal frame. The stretched fabric heated with the help of a heat gun is fixed to the gypsum board using reliable clamps.At the same time, the technology of such a ceiling can be both seamless and seam.

This is explained by the width of the material used. Low-cost film options have a width of about 3 and 3.5 m, although recently customers are offered such options with a five-meter width, which previously was characteristic of only expensive types of coatings. The texture of the tension fabric can be glossy, matte and satin.

Of these, the least interesting is the glossy one, which, although reflecting the light, is inferior to the other two. It reflects everything that is below, and this creates a visual effect of doubling interior elements, which does not look very nice.

Matte film does not create glare, even if such a ceiling is illuminated not only around the perimeter, but also has built-in light sources. It also stretches and is also unstable to mechanical damage. However, for the design of the nursery is the best option. Satin coating looks expensive and a bit like fabric. But taking such a canvas into a nursery is inexpedient: it is too expensive, although the quality of photo printing on it is much better.

As for drywall, this is the optimal material, through which you can create a special design of the ceiling zone. Its possibilities are enormous, because it bends rather well, it is distinguished by its low weight.With it, you can make designs not only frame or linear, but even figure type. And if you consider that it is possible to cut out various shapes from it and fix them on the ceiling, then this will significantly diversify any design of the two-level ceiling design.

The advantage of this material is the fact that it can be repeatedly painted, which is convenient and allows you to periodically refresh the interior.

The effect of a tension two-level ceiling in the nursery may be different. For example, you can make it zonal or soaring. Some options are easy to install, others will require some time to install. However, the effect is worth it: due to this, as well as an additional LED backlight, you can create the illusion of a figure floating in the air.

Traditional options are individual steps or, for example, boxes into which the stretch fabric is inserted. The second is called frame, because it creates the effect of a frame in which the tension film itself is located. This is a more traditional design, which can be found in the design of children. Much more interesting curly options,although it is somewhat more difficult to attach the film to them and longer.

However, due to the smoothness of the lines, you can save the children's room from the rigor and make it a special mood. For example, it is possible to separate some accent part of the room. For example, you can stretch the film over the main part of the room, separating the working area of ​​the area with a simple plasterboard figure. Soaring options are notable in that they may have a different shape. If desired, they can be embedded hidden lights, which will create a special effect.

Advantages of two-level ceilings are:

Despite the advantages, two-level stretch ceilings have some disadvantages:

Nuances of color solutions and design

To make a suspended two-level stretch ceiling of plasterboard in the nursery can be different. Usually it is white with photo printing or a picture on the background of pastel-colored drywall. Colors can be different, although designers recommend using light shades for decorating the ceiling space. Dynamic is also possible, but as small accents, because a bright tone in itself can take all the attention away from other accents of the room.Moreover, the abundance of bright color over time begins to annoy the child.

In the design, you can use monochromatic color film. This is what allows you to further change the interior as the child grows up. When photo printing is applied to the canvas, it is possible that it will have to be changed before its service life ends. The fact is that the images must match the age of the child.

It is unlikely that any teenager would be comfortable in a room on the ceiling of which, for example, pupsies, teddy bears, Disney cartoons characters will be depicted.

What is relevant and inappropriate?

If you decided to decorate the child’s room with a two-level tensioning structure with a photo printing, pay attention to the style of the room. If this is a classic, in addition to the matte surface and gilding, nothing more is needed in the corners of the frame. A print minimum is enough here. For modern trends, quite separate motives.

Looks great on the ceiling print of the cloudy sky. The bright colors of the picture allow you to bring a sense of freshness and air into the space. They look beautiful in the design of two-level ceilings for children and inserts with the image of a starry sky, as well as cosmic nebulae.

You can decorate the ceiling of the teenage room using the image of the world map, adding to it the built-in or hidden perimeter lighting.

However, no matter how beautiful the image may seem, you cannot decorate the design with a photo print with:

Not only are such prints able to visually create something terrible even from ordinary space, they will also disorient the child. Judge for yourself: for example, against a background of giant birds or huge flowers a child will feel worthless and helpless.

And if a military plane flies over it daily, it will develop anxiety on a subconscious level. Whatever parents choose, a glance at the ceiling should not carry a negative.

For kids, you can choose a cartoon drawing with the image of the sun and clouds. However, here it is necessary to adhere to the correct size. Room teenager can be decorated with stylized design.This may be sketches of sketches, although their subject should not carry negative in the room.

What else to consider?

The interior of the nursery should be light. It is not necessary to complicate his drawing, if that does not require the style. Sometimes it is better to focus on the contrast of drywall and stretch fabric used, rather than complement the film with photo printing. For example, for the styles of minimalism and modern more important is the texture of the materials and their elegance with apparent simplicity.

The same can be said about teenage rooms. For example, when there is already photo printing on one wall (for example, graffiti or an image of a city), for a two-level ceiling there is enough frame design in which you can embed creative lights. In such cases, manufacturability is more important than the theme of the picture on the film.

Demonstrate the uniqueness and modernity is better at the expense of texture and illumination.

Regarding the technology of the tension film - it is worth choosing on the basis of its capabilities, although, of course, the seamless technique is better. Soaring designs are good for teenage rooms, they are not so necessary for decoration of children of younger age group. The complexity of the design will depend on the planned interior composition. When there are a lot of details in it, the design of the ceiling should be simpler so as not to create a clutter effect.

Overview of the stretch ceiling in the nursery - in the next video.

Stretch ceilings with photo printing: stylish solutions in the interior

Why does the suspended ceiling sag?

Stretch ceilings with 3D effect in the interior