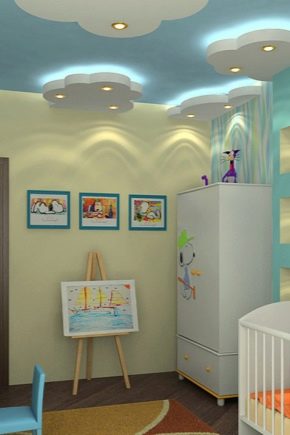 Stretch ceilings today are considered to be one of the most convenient and practical ways to finish the ceiling in any room. Children here will not be an exception, however, you should understand the specifics of design and design.

The principle of stretch ceilings has been known since antiquity, however, for a long time this solution remained excessively expensive - usually expensive fabrics were used for decoration. Fabric ceilings are found today, but such material has already fallen significantly. In addition, he had an alternative - PVC film, which is distinguished by all the necessary qualities, except for the luxury of natural matter.

The PVC version requires pre-installation around the perimeter of the aluminum baguette. The material has enough temperature of 60-70 degrees to soften and become viscous - in such a state it is fixed, leaving a certain margin and not paying attention to small sagging areas. The peculiarity of PVC is that when it is cooled back to room temperature, the fabric is compressed again, due to which any defects in the shape are eliminated - a perfectly flat surface is obtained.

Modern fabrics for ceilings, by the way, are also largely synthetic - they are often made with the addition of nylon, polyester and other polymers. Heating for the installation of such a surface is not required, and does not help, so the stretch is done by the "manual" method.

This option, although it is somewhat more expensive, is still popular because of the ability to "breathe" for the ceiling. In addition, the material is a worthy platform for self-expression of the customer.

Each material from which to make such ceilings has its own advantages and disadvantages, but in general, such a design can be characterized both from the positive and negative sides. Consider the common pros and cons of such a design decision, and let's start with the advantages.

Of course, this does not apply to complex multi-level ceilings, but they usually do in high rooms. 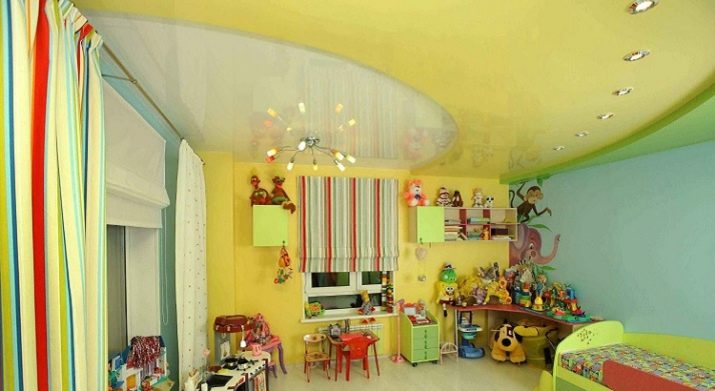 Of course, there are certain disadvantages even in almost perfect solutions, and this statement is equally true for suspended ceilings in the nursery. 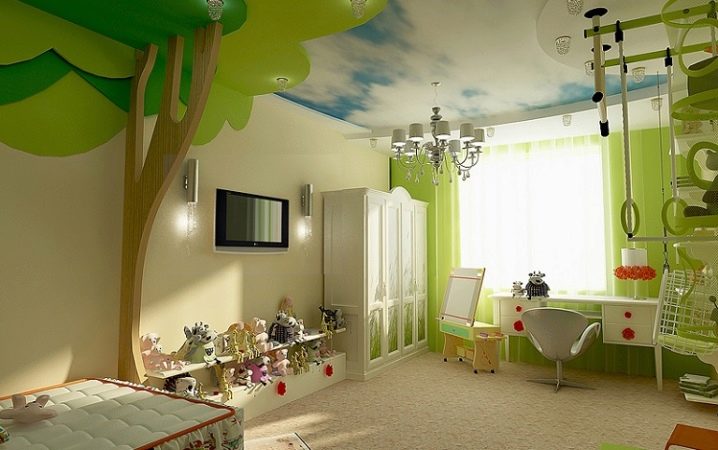 This statement is especially relevant if the customer wants not just a ceiling, but a true work of art - in several levels and with a bright photo printing.

The first classification criterion for suspended ceilings is a group of materials, such as fabrics or PVC, however, this has already been said above. Of course, the variability does not end there, because we consider a few additional features that strongly affect the appearance and performance of the structure.

For example, PVC ceilings are both matte and glossy. The first ones are good because they do not create any glare and do not blind the visitors of the room even in bright light.The pictures are appropriate in this case, but due to the lack of reflection it is undesirable to use dark shades or too bright patterns with great details - such a design will create a feeling of heaviness. The gloss, on the contrary, glitters very brightly - not being a mirror, it still reflects the interior of the room, even if it is blurry. It is used to visually “lift” the ceilings of a room too low, however, due to an excessive amount of glare, such a solution usually should not occupy the entire space of the room — the gloss is more often used in the form of small inserts against a background of matte material. 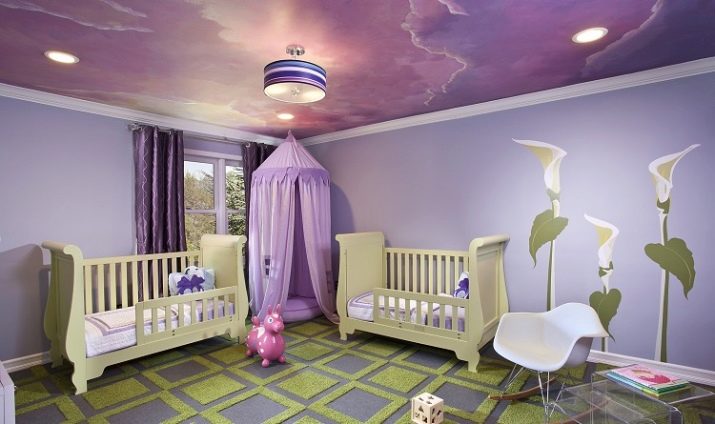 For those who are not ready to make a choice in favor of one thing, there is an intermediate option - satin stretch ceilings, which, contrary to the name, are made of film, and not of fabric. Actually, here everything is in moderation - large drawings or dark details do not put pressure on consciousness so much, and glare and the general effect of “raising” the ceiling are present, but it does not exceed the limit of permissible. Metallic film will become even less glare, but still a brilliant option - here the gloss will imitate metal, from relatively simple bronze and steel to more noble silver and gold.Such a decision is appropriate either for a room of a small child who dreams of his own luxurious palace, or for a bedroom of a teenager who wants a high-tech design or loft.

There is also a translucent film, the task of which is to provide a unique play of light. when creating a ceiling with some kind of potentially three-dimensional pattern like a starry sky. During the day, the advantages of such a solution are not obvious, however, properly placed lighting can provide real magic in the dark.

If we talk about fabric solutions, they are usually more of the same type, however, they are valued for the naturalness of the transmitted patterns, especially since such a material disperses the light evenly and very softly.

Modern technologies allow a creative person to roam - now the realization of this masterpiece on the ceiling of a nursery is not too difficult and expensive. Ceilings with a pattern used to be considered a real luxury, available only to the richest people, however, today the technique allows you to transfer to the material absolutely any image that you find on the Internet in good resolution.For the smallest, it can be a rather abstract drawing of a typical childish idyll in the form of the sun and blue sky, but older children would prefer options with photo printing frames from their favorite movies or real places.

In general, photo printing allows you to reveal the hobbies and hobbies of the child from any side, so do not think that the repair in the nursery can not be a chic gift for the baby. Insanely popular in recent years, the solution is also the starry sky, which customers choose regardless of whether the child loves astronomy. The fact is that the night sky has always attracted the attention of a person and fascinated him, and modern masters can make the “home version” look no worse than the real one. 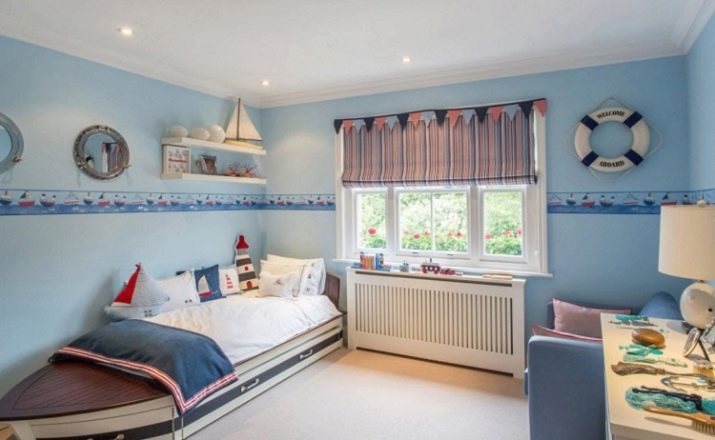 This can be realized with the help of the photo print already described, and some of them get out of the situation with the help of special night-light projectors, but only a multi-level stretch ceiling provides all the necessary conditions for the credibility of the picture.

The advantage of stretch ceilings to create the illusion of a starry sky is that light sources can be inside the structure - how to shine through it,so it is possible to give light through holes specially made in the right places. By the way, suspended ceilings are highly valued for using them to achieve a perfectly flat surface, however, it would be unfair to assume that the materials used (in this case, more like PVC film) can not be used for the completely opposite result - creating relief.

When heated, the material becomes elastic and can take on any shape.and then, cooling down, “seizes” everything that is under it - products from bent drywall are usually used as such a basis. Given that the film in most cases looks much more presentable, modern designers are no longer willing to limit themselves to bare material when creating waves or simply rounded ceiling shapes. Such a solution not only allows you to create a unique design, but also helps to get trite in a situation where the design features of the room are not very conducive to straight lines.

With an abundance of options available, the problem is always to determine the best among them.This problem is relevant, including the choice of design of the stretch ceiling in the nursery. You should always push off from the personal interests of the child, because this is his bedroom, you can even consult him, but if there are no good ideas anyway, You can pay attention to general tips. 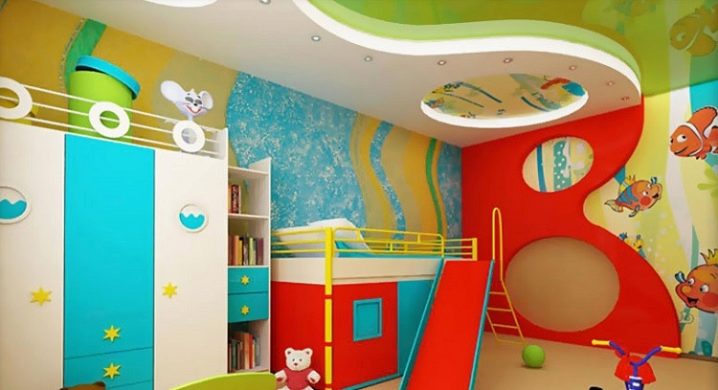 The first photo makes it obvious that the stretch ceiling in the nursery does not necessarily have to be decorated with some kind of pattern in order to be the height of aestheticism - this, for example, can be called rather restrained. In the example, we see a two-level construction, when episodic glossy inserts on a common matte background are used to easily “raise” the ceiling in the room. Starry sky, the realism of which is achieved due to the fruitful interaction of photo printing and correctly selected lighting, promises real success.

Childhood is a dreamy time, and what can inspire a more dreamy mood than a constantly cloudless sky over your head? And you can use modern technologies to the fullest and please the child with a full-fledged picture - this is especially appropriate if all the walls are lined with furniture and a similar result cannot be provided in the form of wallpaper.

The presence of a fairy tale beside will definitely enhance the mood of the child and make his view of the world positive.

What features need to be considered when creating the interior of the nursery and how best to arrange the ceiling, see the following video.

Stretch ceiling in the attic: examples of design

How to choose light bulbs for suspended ceilings?

Stretch ceilings: the subtleties of choice and operation

How to choose curtains for curtains under the stretch ceiling?

How to wash stretch ceilings?

Multi-level stretch ceilings in the interior