Riveting rivets for exhaust rivets are a specialized tool and are widely used in many spheres of human activity. High consumer demand for instruments is due to the versatility of the joints formed with their help and ease of use. 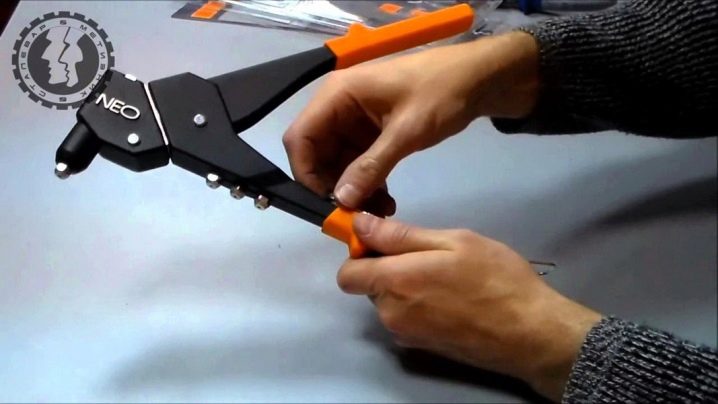 Today, the riveting system is one of the most common technologies for joining two or more surfaces. Using this technique it becomes possible to install structures in hard-to-reach places.where welding work cannot be done for a variety of reasons. The most common restriction on the use of welding is the presence in the immediate vicinity of the working surfaces of flammable orobjects supporting combustion, as well as in the case if the parts to be joined are made of combustible materials. In addition, the use of a riveter is indispensable for installation in hard-to-reach places where the installation of nuts or the use of welding is impossible.

The method of riveting with the help of an exhaust riveter is used in mechanical engineering, in repair docks of sea vessels, in auto repair shops and in construction. A joint formed by exhaust rivets can well withstand shock, weight and mechanical loads. It is not broken, but only stretched to the length of the possible tension of the riveted sleeve. With the help of an exhaust instrument, materials of various structure and density can be combined: metal, leather, textiles and plastic. Surfaces can be combined in any variants, forming a strong and durable connection. 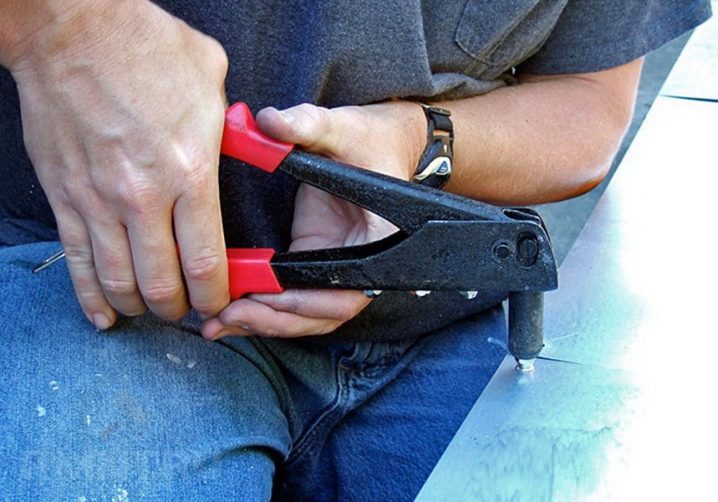 In order to understand the principle of action of a riveter, it is necessary to imagine how the exhaust rivet is arranged. The fastener is represented by two elements: a hollow cylinder with a head at the end and a rod. The cylinder is called the rivet hub, and its rim size is judged by its diameter.The metal rod in appearance resembles a normal nail, and differs from it only in the rounded shape of the cap. 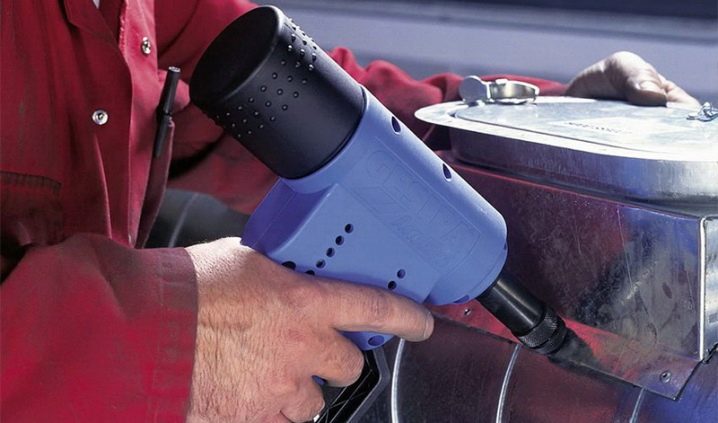 The material for manufacturing exhaust rivets are steel, aluminum and copper alloys. But when choosing this or that material, it is necessary to take into account the likelihood of the galvanic couple effect, which leads to the rapid oxidation of the weakest of metals and may lead to rusting (corrosion) of the connected surfaces. This phenomenon can be observed with a combination of copper and aluminum, so when choosing rivets, you need to pay attention to the material.

The principle of operation of the exhaust riveter is as follows: after the rivet has been inserted into the hole previously drilled on both surfaces, the riveter grips the rod of the fastener with the help of the riveting head, rests its paws on the material and pulls it out. The rod flattens the end of the sleeve and breaks off. Thus, a flattening in the form of petals is formed on the back side of the fastened surfaces, and the sleeve head remains on the face side. 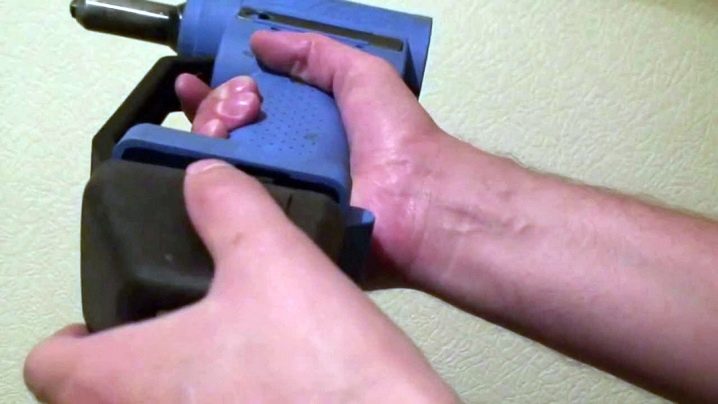 Devices for exhaust rivets come with manual (mechanical), pneumatic, battery, electric and pneumatichydraulic drives. The most popular and popular tools are mechanical models: their design is simple and reliable, and working with them does not require special skills. The tools are equipped with working heads of various diameters, which allows them to be used for riveting rivets of various diameters and lengths. The principle of operation of mechanical riveters exhaust type is based on the principle of traction force applied by man.

Models do not require an electrical connection and can be used in any temperature and humidity conditions. Structurally, mechanical models are similar to a pistol and are represented by spring mechanisms designed to retract rivets and a lever system that provides force transmission. Hand-held devices, in turn, are divided into one-handed and two-handed models. 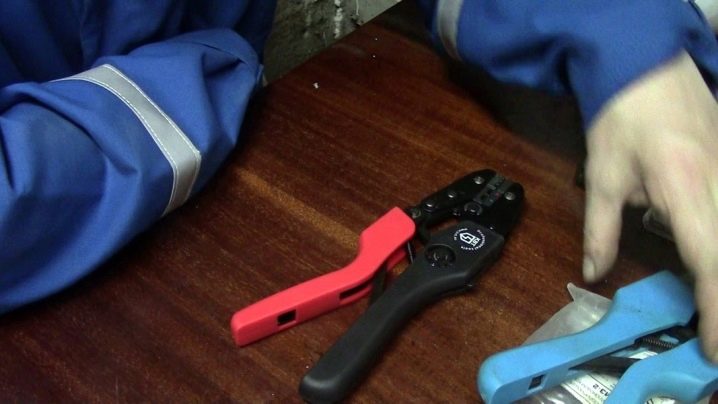 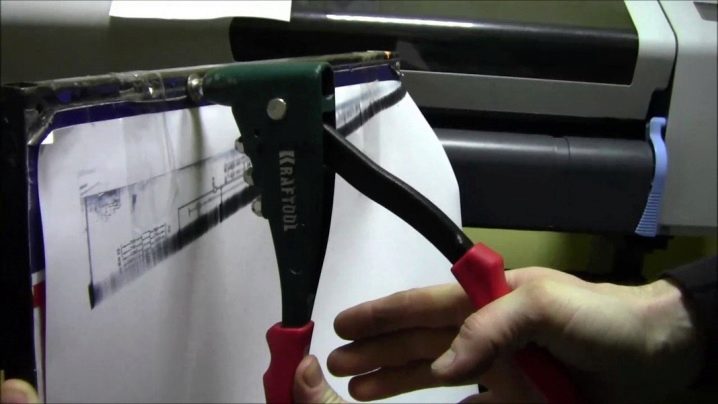 Pneumatic tools are characterized by high performance and are used in industrial plants. The principle of operation of the models is not based on a hand-held one, like that of mechanical samples, but on the operation of compressed air supplied to the working chamber by means of a compressor. Due to the fact that each of the riveted jaws moves in its channel hole, the probability of jamming or misalignment of the hardware is almost absent. Installing the rivet is done with one touch of a button, which significantly increases the speed of work and allows you to use the tool in large-scale production. 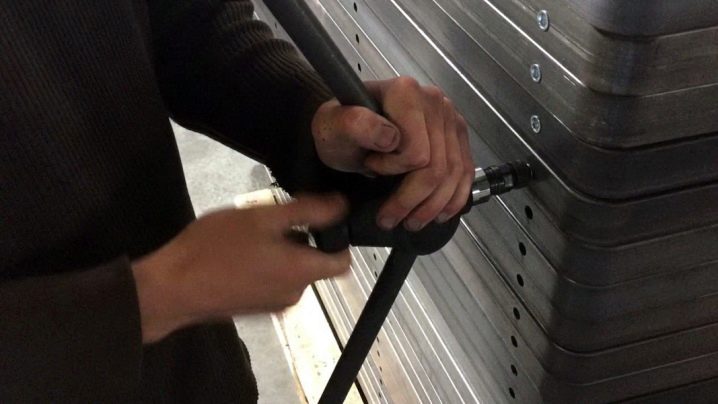 When choosing a pneumatic stacker, you should consider a number of operating parameters of the tool. So, the higher the force of the device, the more thick rivets it can work. Also important is the maximum operating pressure, which industrial models should not be below 6-8 atmospheres.If work with thick surfaces is supposed, then it is necessary to pay attention to the working course of the tool. The maximum thickness of the parts to be connected that the device can handle depends on this value. It is also necessary to check the number of nozzles adapted for different sizes of hardware, and pay attention to the air flow, which should be 30% lower than the capacity of the compressor.

The advantages of pneumatic riveters include high performance, low weight and short turnaround time. Among the minuses there is a size of the products, and their high cost, which is explained by the fact that the instrument belongs to the professional category.

Battery Models superficially resemble a drill, they are distinguished by high speed of work and no need to apply physical effort. In addition, unlike electric models, there are no wires in the battery devices and they do not need a close location of the source of electrical power. The disadvantages of these riveting tools include the limited battery life.Such devices are used for domestic purposes and are not intended for mounting large volumes. For example, it is unlikely that she would be able to sheathe a ventilated facade with the help of a cordless tool, and to rivet something in the country or in the garage is quite convenient. 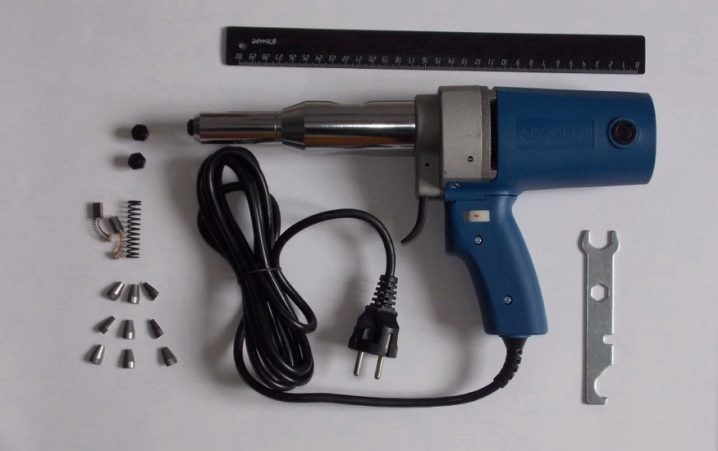 Electric models able to work exactly as long as necessary, and do not depend on the volume of the battery or the operation of the compressor unit. The electric riveter resembles an electric drill: its principle of operation is based on the transmission of torque to the riveting head and its rotation in a clockwise direction. The klepalnik is equipped with an electric wire, the presence of which is completely compensated by the ability of the device to operate in any temperature conditions.

With skillful handling exhaust riveter can become an indispensable assistant in the repair and construction.

For information on how to use a mechanical zaklepochnik, see the following video.

Bits with a limiter for drywall: advantages of use

Prosekatel for a metal profile under drywall
Information provided for reference purposes. For construction issues, always consult a specialist.