What should be the floor in the hen house and what is best to choose? 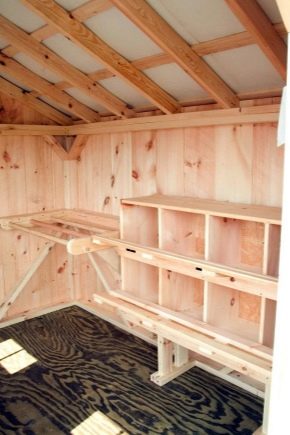 Many people, having received their plot of land far from urban new buildings, are enthusiastically accepted to build not only greenhouses for their own vegetables, but also premises for breeding domestic chickens. And at first such owners have a huge number of questions on construction. One of such important questions is what should be the floors in these rooms, and if there are options, which one is better suited for specific conditions. 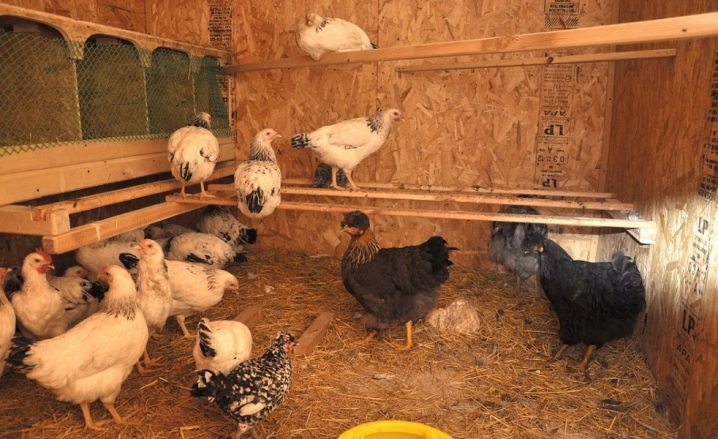 Ideally, the chicken coop should be built taking into account its heating during the cold season. In order for chickens to have good productivity, they need not only complete feed, but also good housing conditions. The temperature in the room where they are kept should not fall below +10 degrees. If this temperature norm is not ensured, then the bird begins to ache from hypothermia, ceases to carry eggs and gain weight. Inflammation of the lungs is one of the most common diseases among chickens, leading to the loss of livestock, and in severe frosts they often freeze their legs. Of course, this cannot be allowed. 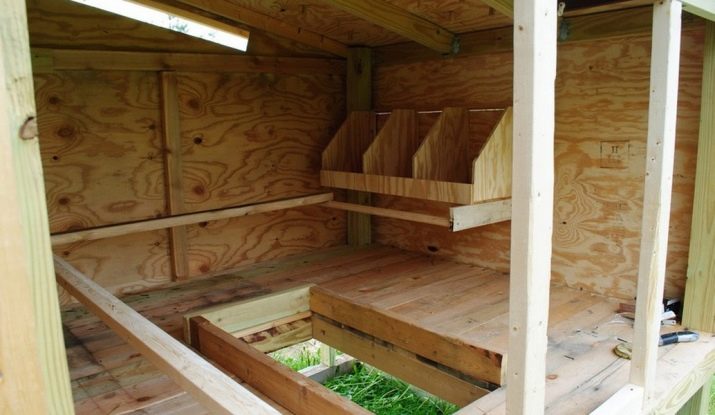 Regardless of what is the room, which is determined to keep the birds, the device floor in it is the primary task of the owner. The floor in the hen house must be equipped even before the planned number of hens are placed in it. Its reliability from the penetration of predators, moisture and cold from the outside is a prerequisite for the successful management of its own poultry industry.

Most often in chicken coops equip these types of floors:

Of all these types of wood, the best flooring material is the best, and the lowest cost is ground (earth floor).Concrete coating requires material costs not only for the work with concrete itself, but also for those activities that will be aimed at eliminating the main drawback of such floors - the rapid heat loss in inclement summer and its complete absence during all remaining seasons. But let's talk about all this a little later. 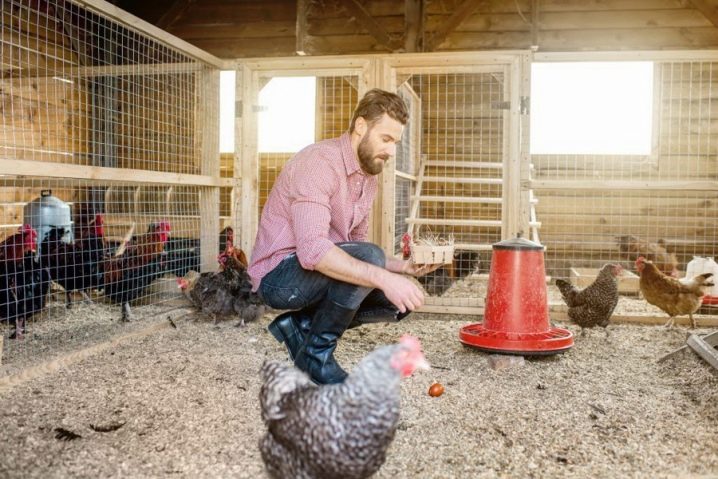 Every owner who decides to start laying hens on his farm is free to choose the floor covering in the hen house for his own reasons. But he can not ignore the unshakable requirements for floors in such premises, depending on the following factors:

For too harsh climate areas of the North and Western Siberia, where in winter frosts often reach the mark of -40 degrees Celsius, earth or concrete floors will not do. On such floors without heating, the bird has no chance of surviving. Therefore, for the owner there are no other options for choosing the floor, except for wooden or concrete with the obligatory heating of the room.

The earthen floor is not suitable for those areas of residence where there are many predators, loose soil and close groundwater storage.In the rainy season, an earthen coop in the area of ​​close groundwater is at risk of being flooded, and this state of affairs may be good enough for a waterfowl, to which the chicken has nothing to do. The wooden floor is also poorly suited to a chicken coop in damp areas - in conditions of high humidity, it quickly rots and becomes covered with fungal growths.

Concrete coating well protects the house from rodents and predators. And if a waterproofing gasket is laid under the concrete (thick polyethylene film in several layers, roofing material or roofing with bitumen filling), neither soil moisture nor ground water will penetrate into such a room. In the southern regions, such a floor is no less good for a poultry house, just like a wooden one. But in wet areas it has all the advantages over other coatings. 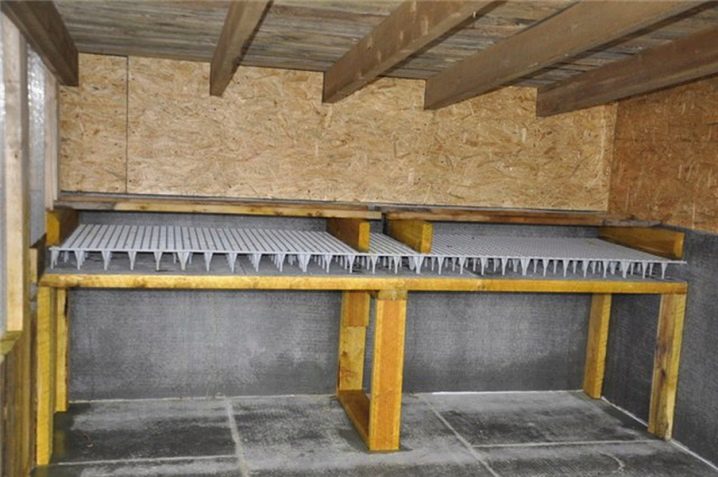 In the dry climatic zones, the cheapest option of the floor is earthen. It doesn’t cost much, but in case of loose soils it must be strengthened by paving and pressing the clay layer on top. Clay well holds moisture and creates a fairly dense upper layer of the coating.It is recommended not to arrange such floors in forest areas, where there is a large number of animals that love to hunt both eggs and birds themselves. 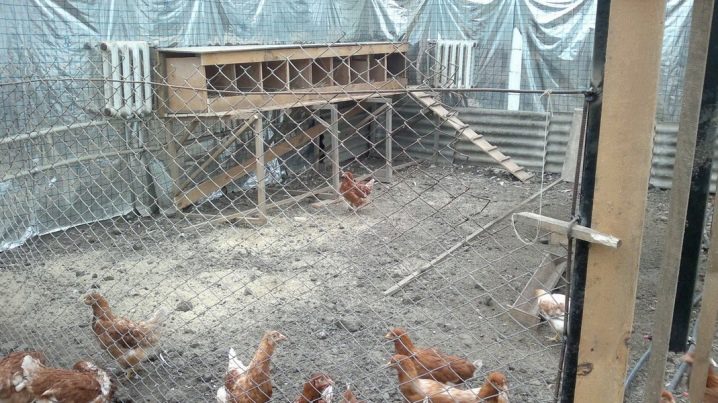 When all other conditions are equal or suitable, choosing the material for a floor device in a hen house should be guided by the following requirements:

How to do it yourself?

Floor installation should be carried out after the erection of the poultry house walls. And since wooden and concrete floors require a foundation, this circumstance should be taken into account before the construction of the chicken coop. Of course, if the choice of the owner was made in favor of one of these types of sex. If under the chicken coop is planned to use the finished premises, in this case, the foundation will need to be embedded in it. It is possible to use the existing basement under the premises, but this is not always feasible.Besides, it is not known what loads the old foundation was calculated on, and whether it can be a reliable support for the entire building after the alterations. 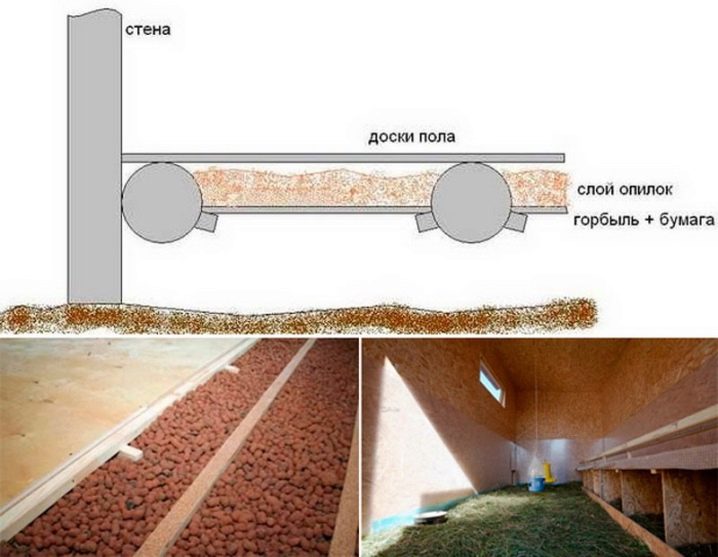 For a wooden floor, the foundation may be of a light type, for example, columnar or tape with a shallow fill. But it is preferable, for economic reasons, to arrange all the same column foundation for such a structure as a chicken coop. It is made by the method of brickwork on a solid foundation or by drilling (digging) narrow holes to a depth exceeding the depth of soil freezing in the area. Dug out or drilled holes are used as nests into which you can insert scraps of metal pipes with a diameter of about 200 mm, and then fill their internal cavity with concrete. This will result in a sort of reinforced concrete pillars on which wooden logs are laid around the perimeter and at the intersection of the chicken coop partitions. 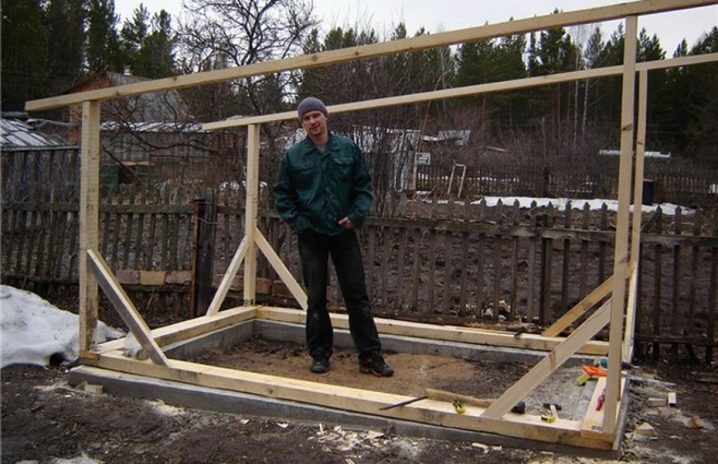 If there are no pipes in the farm, it is possible to arrange a column formwork in the shape of a square measuring 200x200 mm in each pit with the help of boards.and then also fill them with concrete. It is important that the foundation pillars be at the same height on the horizon and rise above the ground level by 25-30 cm. This applies to pipes and wooden formwork.If the pillars are made without pipes, then you need to remember to reinforce the concrete casting with metal reinforcement (or with simple rods of wire with a diameter of 5 or 6 mm). The pillars will be a fairly solid foundation for subsequent construction, therefore, it is sufficient to distribute them at a distance of 3 meters from each other along the entire perimeter, with the obligatory consideration of opposing supports on either side.

For very small buildings with a planned population of laying hens up to 15-20 pieces, it will be enough to lay columns of bricks in 3-4 rows (3 bricks in a row). It is advisable to pour concrete with a base with a small depth (10-15 cm) into the ground under each brick pillar. Such pillars are installed more often - about every meter. You can meet other recommendations (every 50-60 cm), but this is too often for such a light construction. 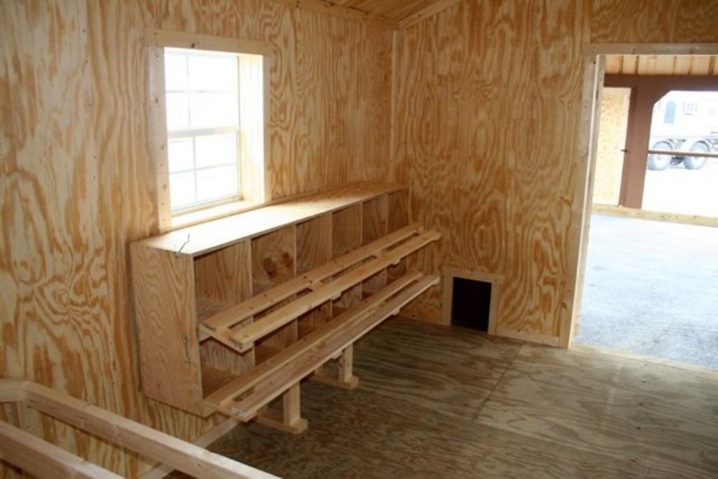 Further work on the device of wooden floors are made according to a strict algorithm. 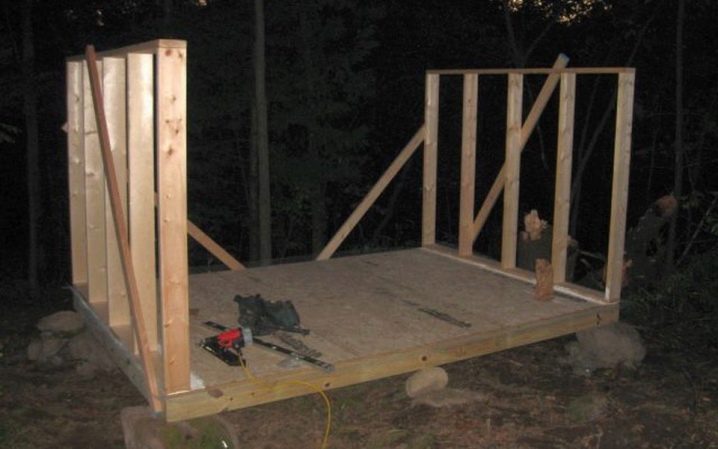 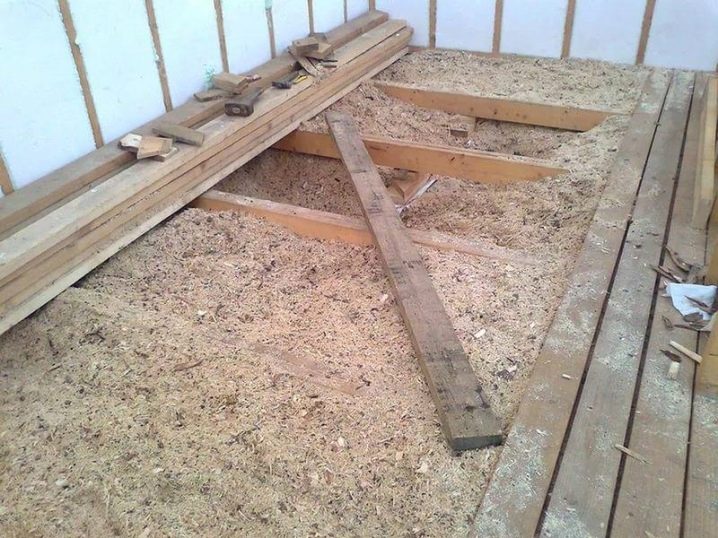 For a concrete floor, it is better to make a strip foundation with a pouring depth of 30-40 cm. The height of the ridge above the ground is the same 25-30 cm as with the columnar foundation.

When the concrete completely hardens, it will be possible to take over the floor. 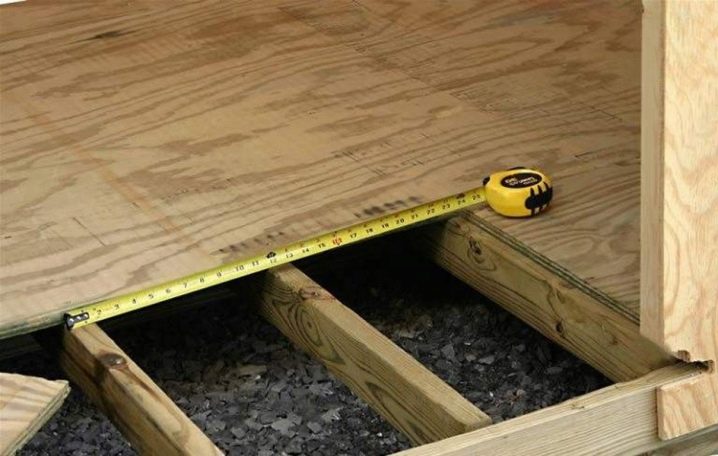 Ground floor is arranged as follows: 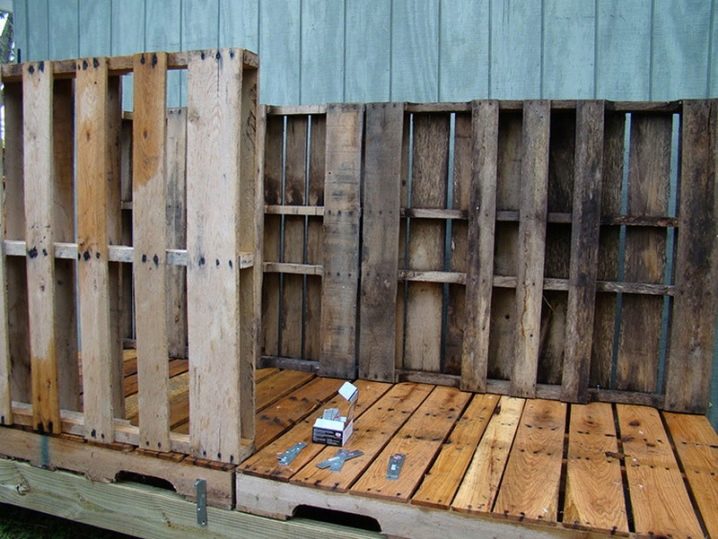 For the insulation of floors in the hen house, organic litter materials are more often used: straw, hay, sawdust, moss.These components of the litter are used not only separately, but also in a mixed form. For example, sawdust is never used for this purpose in its pure form, wood shavings serve as a mandatory addition to it. In some frosty cases, peat or moss is added to them, and in addition this mixture is covered with straw. 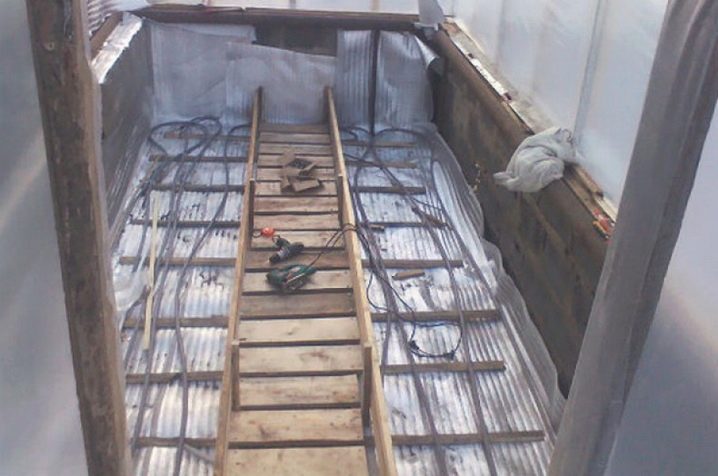 Moss peat is an excellent material for warming floors in chicken coops. In addition to warming, it is able to absorb unpleasant odors in the room and has antiseptic properties. Such a moss, spread in a chicken coop in the winter, saves the hens' feet from freezing.

The litter on the floor in the chicken coop sometimes reaches a thickness of 30 cm. Due to the organic litter, the temperature in the poultry housing is kept at 23-25 ​​degrees even on frosty days. No additional heating is required. The thing is that in such a litter, under the influence of bird droppings, the processes of decomposition of organic substances occur, accompanied by an increase in temperature in this layer. 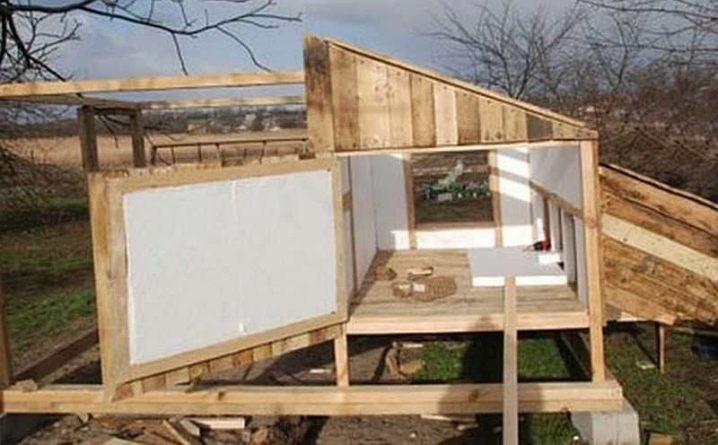 The main thing is to change the old litter in time, which loses its heat-saving capacity, for a fresh portion of organic matter, ready to “work” on heating the room. Usually the litter is replaced with fresh one every 2 months.It should be noted that poultry specialists do not recommend the use of mineral substances, such as mineral wool or wall insulation materials made of chemical materials, that can emit unpleasant odors when heated as insulators for poultry houses. 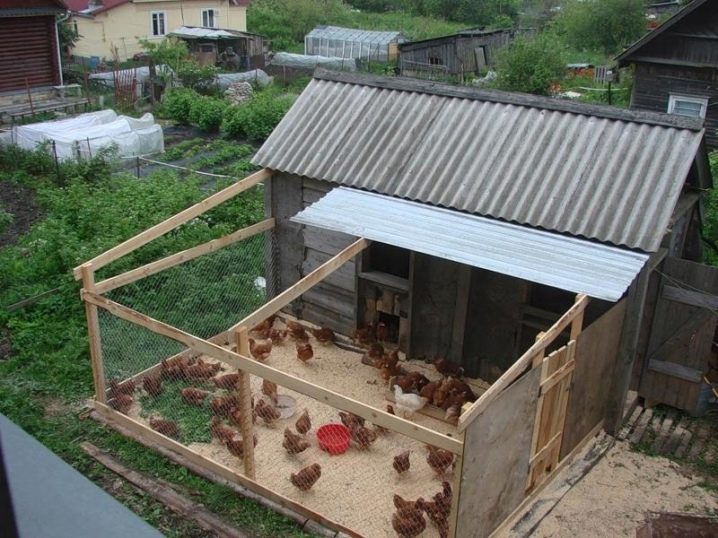 Reviews and advice of professionals

According to the feedback from the poultry farmers with experience, it becomes obvious that the sympathy prevails in the arrangement in private poultry farming of chicken coops with wooden floors. This is understandable: people want to eat an environmentally friendly product and therefore try to provide their hens with a natural habitat. Some people on this occasion believe that it is better to spend an extra one hundred thousand rubles on good products from their layers, than to give four times more to pay for the treatment of the gastrointestinal tract poisoned by chemical eggs and meat of artificial chickens. 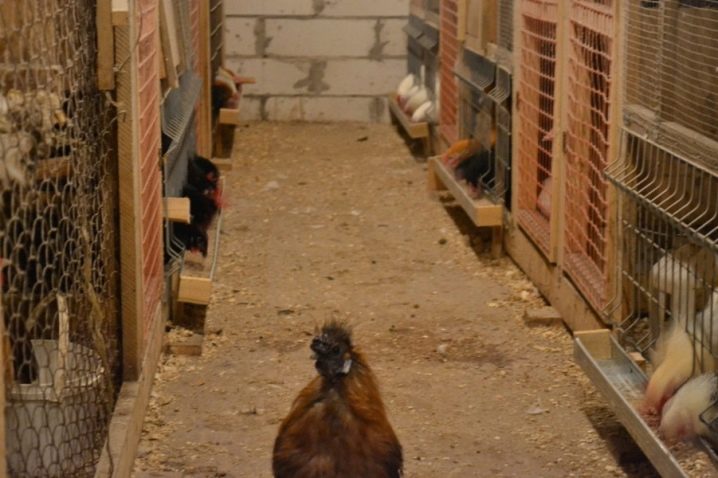 But for now, according to statistics, in our village they live and act in the old manner: the little pig sleeps in his dung, and the chickens dig holes in the dirt floor of their chicken coop. Farming in the poultry industry is more committed to a decent maintenance of its livestock, but such farms are still very, very few per capita.We'll have to take on this business ourselves to eat real eggs with a yellow yolk and chicken meat, which is cooked for 3 hours instead of half an hour, which turns the chicken from the chicken farm into dust. 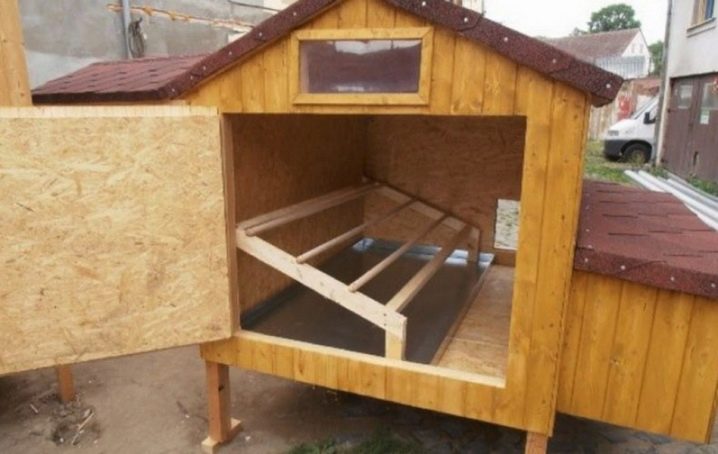 Starting the choice of floors for your own chicken coop, you need to listen to some useful tips. 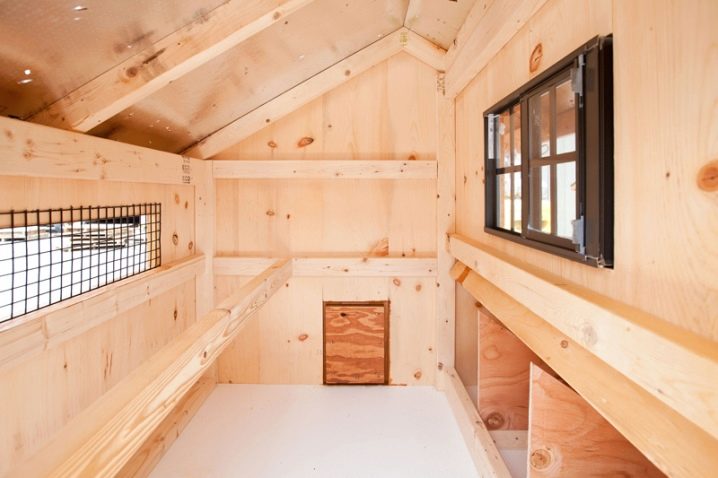 How to make the floor in the hen house with your own hands, see the next video.

How to make a smart chicken coop?

How to make ventilation in the hen house with your own hands?

How to make a simple chicken coop in the country?

How to build a chicken coop for 10 chickens?

Features and tips for setting up a chicken coop