Greenhouses "Tulip": models with opening sides and a sliding roof 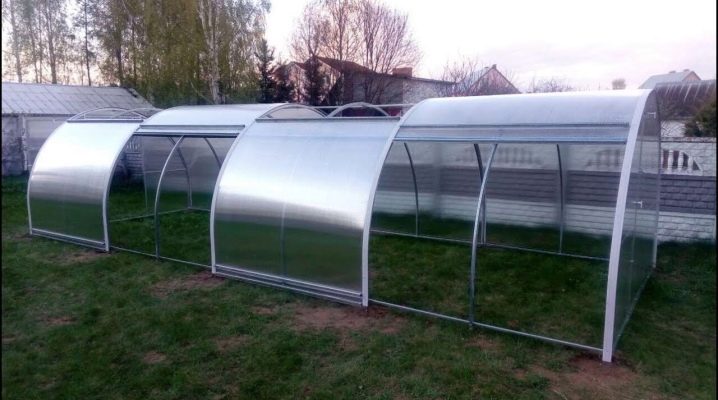 Gardeners and gardeners are very biased in choosing a greenhouse. The mass of parameters is estimated - from the price to the place occupied on a site. Each has its own criteria: someone needs a bountiful harvest and ease of operation, possibly at the expense of appearance, for someone, on the contrary, the overall composition of outbuildings in the country, including greenhouses, is important. The greenhouse “BotanikTM Tulip” is a new word in the greenhouse market; nevertheless, it has already won a large number of admirers.

In Russia, produced quite a large number of types of greenhouses, each of which finds its consumer.

Models are offered a variety of:

As for the greenhouse, Tulip is a product of the company AGS-Service, patented in the Russian Federation and the Republic of Belarus. This type refers to the novelties of 2017, that is, a completely “fresh” design. Like any other thing, the greenhouse "Tulip" has both advantages and disadvantages. 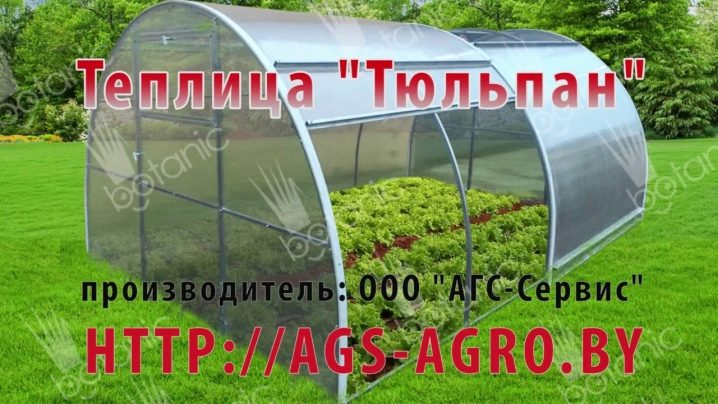 The undoubted advantages include several characteristics. 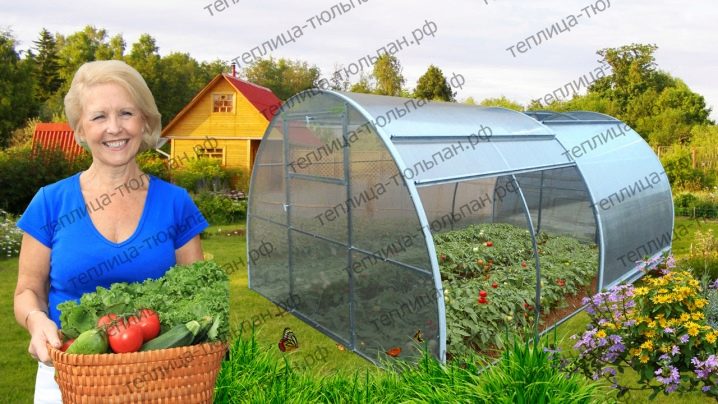 This type of greenhouse has its drawbacks.

If we compare the “Tulip” with the Delta greenhouse, which has, at first glance, a similar type of device, we can distinguish the main difference: in the first version, the roof and sidewalls are shifted, and in the second, they are raised. Accordingly, for the "Delta" and other similar structures, additional space is needed when its sash is open. For "Tulip" is not required.

The Tulip greenhouse can be installed on any summer cottage, because its size range includes models with a length of 4, 6, 8 and 10 m. The width and height of each are the same - 3 and 2.1 m, respectively. A mini-greenhouse with a length of 4 m will find its place even in the smallest country house, and due to the fact that the roof and the sash are shifted, and not opened to the outside, it can be put right next to the beds.

Greenhouse is made of galvanized stainless steel tubes 40x20 mm, connected by welding.It should be noted that the thickness of the pipes is larger than in similar collapsible structures (20x20 mm), which makes the frame more durable and stable. This also contributes to the "smart" mount on 4 bolts, which the manufacturer himself describes as "stronger than welding." Polycarbonate with a thickness of 4 to 6 mm and density of at least 0.65 kg / m3 is stretched onto the frame (these are the conditions of the manufacturer).

The greenhouse "Tulip" with opening sides and top is made only from all-welded pipe, which increases its strength and rigidity compared with similar collapsible structures. The sliding and sliding roof is also polycarbonate, it can be either slightly moved away for ventilation, or opened completely for the winter period or for the time of rain for natural watering.

The kit of the frame includes everything that is needed to collect the greenhouse (screws, bolts, hardware), with the exception of polycarbonate, which is purchased separately. Depending on the thickness of the polycarbonate, choose the end profile. At each end of the greenhouse there are 2 doors, each of them has a vent.

The manufacturer has developed special guides.which help reliably fix and hold the sash and roof in a given position of the owner. This profile is also resistant to ultraviolet rays and is not susceptible to destruction due to their impact.

The Crab system (another innovation of the manufacturer) distributes the loads coming from the outside evenly over the entire surface area. This is due to the fastener connecting the arcs and transverse strips, because of which the polycarbonate fits tightly both to the arcs and to the strips.

To assemble a greenhouse, you will need the following set of tools:

Works are recommended to be made in cotton gloves with a polymeric coating. Despite the fact that the foundation is not a prerequisite in order to build and install the Tulip, the manufacturer recommends its construction. It can be tape, monolithic or timber.

In case the foundation is impossible for any reason, the lugs are designed to fit the greenhouse directly into the ground.However, the base for the installation must be level to avoid skewing the greenhouse.

Assembly instructions can be viewed on the manufacturer's website. It is quite detailed and vivid. Due to the fact that the frame arcs are all-welded, and all the accessories are attached, it is quite simple to install a greenhouse. Part of the parts is supplied assembled, so it is actually proposed not to assemble, but to assemble it.

Despite the fact that the Tulip can be placed anywhere in the plot, since the greenhouse does not require additional space during the opening of the valves, there are a number of recommendations.

Observing them, you can choose the best place to install a greenhouse.

It is equally important to immediately decide - for the cultivation of which will be used greenhouse. If you plan to use the crop for personal use, then you should not invest too much money in its purchase. If there is an idea to build a business on garden crops in the future, then it is worth considering the possibility of acquiring a more spacious and impressive (including cost) construction.

Since the Tulip is a greenhouse, for which polycarbonate is purchased separately, it is better not to save money and order the most dense and high-quality material. Both the strength of the future structure and its service life depend on it. 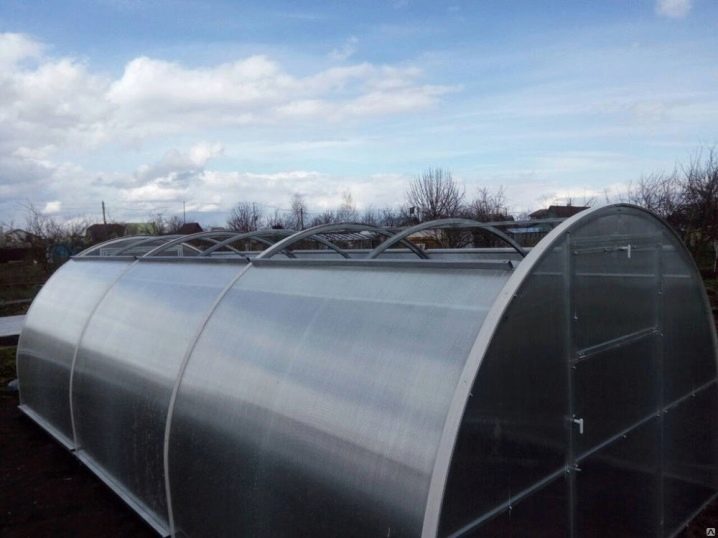 Consumers generally speak positively of Tulip, noting both ease of assembly and ease of use. In addition, the ability to move the roof for the winter period and not to clear snow from it is highly appreciated by summer residents, especially those who are deprived of the opportunity to regularly go to the country in winter.Being removed, the roof is not subjected to the pressure of snow mass, respectively, the design remains intact.

Also marked and strong frame, and the relative simplicity of its assembly, and the possibility of airing in whole or in part, depending on the weather. The ability to move the roof and sidewalls is convenient for both plants and gardeners, who can harvest with comfort, not exhausted from the stuffiness in the stale greenhouse air. 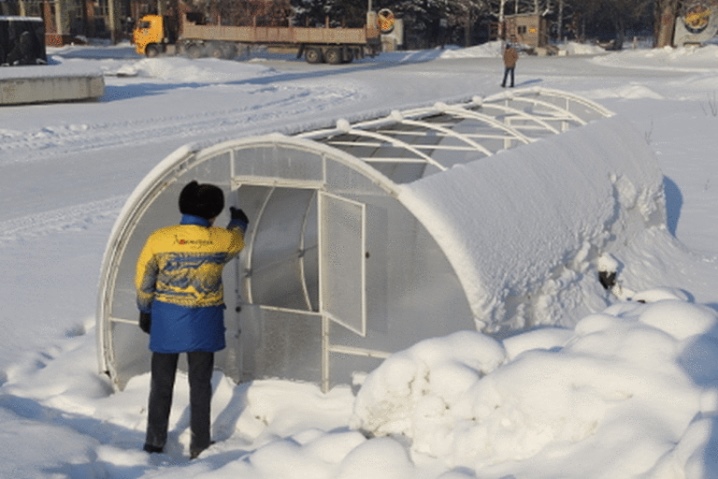 Among the disadvantages of buyers highlight the cost and the need to order polycarbonate separately, as it is not supplied with the greenhouse. In addition, not all consumers have figured out how polycarbonate should stretch, and if the carcass assembly doesn’t cause any particular difficulties (it is delivered half assembled), then putting the greenhouse into a final form still often requires the help of professionals who deal with such types works earlier.

Review the greenhouse "Tulip", see the video below.

The foundation for the greenhouse: how to do?

Types and features of greenhouses with opening roof

How to build a greenhouse from polycarbonate?

Heaters for the greenhouse: which one is better to choose?

Choosing the way of heating greenhouses

Lamps for greenhouses: what to choose?

Features of the manufacture of greenhouses from metal profiles
Information provided for reference purposes. For construction issues, always consult a specialist.